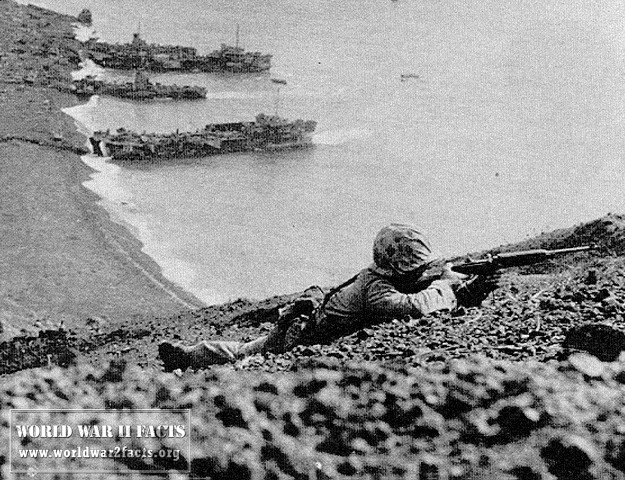 The Battle of Iwo Jima was fought between the United States and Japan between February 19th and March 26th 1945. The battle took place in the Pacific Campaign of World War 2 and finished with the U.S. being victorious and gaining control of both the island and the Japanese airfields located at that location. Although kept quiet at the time, the strategic value of the island would really be as an alternative or emergency landing field for the B-29 bombers that would eventually carry the atom bomb and strike Hiroshima and Nagasaki. The most famous image of the battle was the raising of the American flag atop Mt. Suribachi which is one of the most reprinted images in history.

When Did the Battle of Iwo Jima Occur?

The Battle of Iwo Jima occurred between February 19th and March 26th 1945. Although the battle concluded, for several additional years, stranded Japanese soldiers would be found as late as 1949 (or 1951 depending on the source material cited).

How Did the Battle of Iwo Jima Start?

The United States conducted initial carrier air raids against the island in June, 1944. Before the U.S. invaded, the island would be hit with more shelling than used against any Pacific island during the war. B-24 heavy bombers were used flying out of the Marianas for the majority of the bombardments. Prior to the USMC landing on the beaches, navy planners only authorized 3 days of naval bombardment of the island instead of the 10 days requested by the marines. Bad weather would additionally impact the pre-assault bombardments, but D-Day remained set for February 19th, 1945.

On D-Day, there were more than 450 ships amassed off of Iwo Jima. Just after 0900 local time, Marines from the 4th and 5th divisions landed at the Blue, Green Red, and Yellow beaches abreast of each other. By design, the Japanese held off initial assaults against the American troops who were slowed by the volcanic sand on the beach. Once the naval gunnery subsided, the Japanese defenders would emerge from hidden, underground positions to begin fiercely defending the island. The initial assault tasks for the USMC divisions were for the 4th to take the Japanese strongpoint, Quarry, and the 5th to isolate Mount Suribachi on the opening day of the invasion.

Who Were the Commanders During the Battle of Iwo Jima?

The U.S. code name for the operation on Iwo Jima was Operation Detachment. The commanders assigned on the U.S. side for the battle were:

Iwo Jima was officially labeled as being a strategic island due to the need for a closer base for fighter support of long-range bombing missions being flown against mainland Japan. The U.S. bombers were flying out of the Mariana Islands which were too far for fighters to fly in escort for the duration of the bombing missions. The capture of Iwo Jima would also provide an emergency landing strip for B-29’s returning from bombing runs with significant damage. The island would also provide a strategic point from which to base sea and air blockades to further degrade the Japanese air and naval forces.

Taking Iwo Jima would not prove easy for the U.S. forces. The assault would take 36 days and is epitomized by the following quote by Fleet Admiral Chester Nimitz, “Among the Americans who served on Iwo Island, uncommon valor was a common virtue.” For the Japanese defenders, the island held key strategic value as the last obstacle to the American forces before they would invade Okinawa and mainland Japan.

Summary of the Battle of Iwo Jima

One day after the initial landing, the 28th Marines would secure the southern end of the island and move to the take Mount Suribachi. At the end of the 2nd day, the USMC would control one third of Iwo Jima as well as the Motoyama Airfield #1. By February 23rd, Marines from the 28th would reach the top of Mt. Suribachi and raise the American flag.

The 3rd Division of the USMC would be put into the fight on day five of the battle and were given the mission of taking the center sector of the island. Although the fall of Mt. Suribachi and capture of the Japanese airfields signified the defenders would ultimately lose, taking the remainder of the island would not prove easy for the Marines.

The defending commander, Lieutenant General Tadamishi Kuribayashi, would focus his forces on the defense of the northern and central sections of the island. Defending soldiers would leverage numerous miles of caves, blockhouses, and pillboxes to effectively use surprise and entrenched fortifications to extract a heavy toll on the attacking Marines.

The U.S. 3rd Division would run into the most fortified portions of the island on their move to take Japanese Airfield #2 using frontal assaults. By the night of March 9th, the Division’s forces would reach the northeastern beach on the island effectively cutting the Japanese defense in half.

On March 10th, the three divisions would meet-up on the coast of Iwo Jima almost a week after the first B-29 bomber made an emergency landing on the island on March 4th, 1945. The final operational phase of the battle started on March 11th with fighting focused on eliminating individual pockets of resistance. The island was declared secure on March 26th following another banzai attack against the air corps personnel and soldiers on the beaches. The 147th U.S. Army Infantry regiment would assume ground control of the island from the U.S. Marines on April 4th, 1945. The Battle of Iwo Jima would see the largest body of Marines committed in combat in a single operation during the entire war.

How Many Medals of Honor Were Awarded from the Battle?

There were 27 Medals of Honor awarded to Marines and U.S. navy sailors from the battle. More were awarded than for any other operation during World War 2 with many being given posthumously.

Japan suffered huge losses from the battle with only 200 of the 21,000 dedicated to the defense surviving. The U.S. victory at Iwo Jima was another step on the island hopping campaign towards the mainland of Japan. The fighting was so fierce and sacrifices on both sides so great, that the battle is remembered every year and resulted in a number of Battle of Iwo Jima books, movies, and the construction of the Iwo Jima Memorial in Washington, D.C.

By popular demand, we’ve drafted a short 10 question quiz on the Battle of Iwo Jima for you to try out and enjoy! Please feel free to post ideas for new questions to add to the quiz in the comments section of the article!

Welcome to WorldWar2Facts.org Battle of Iwo Jima Quiz! Please take your time and pick the most correct answer of the options provided.
Start
Congratulations - you have completed World War Quiz #3 (Battle of Iwo Jima). You scored %%SCORE%% out of %%TOTAL%%. Your performance has been rated as %%RATING%%

The fortifications on Iwo Jima had immense and complicated bunkers, a large amount of hidden artillery, and more than 10 miles of tunnels. This was the first attack on the Japanese home islands and the defense was tenacious. More than 20,000 of the 21,000 Japanese defenders lost their lives during the battle with only 216 taken prisoner during the two month battle.