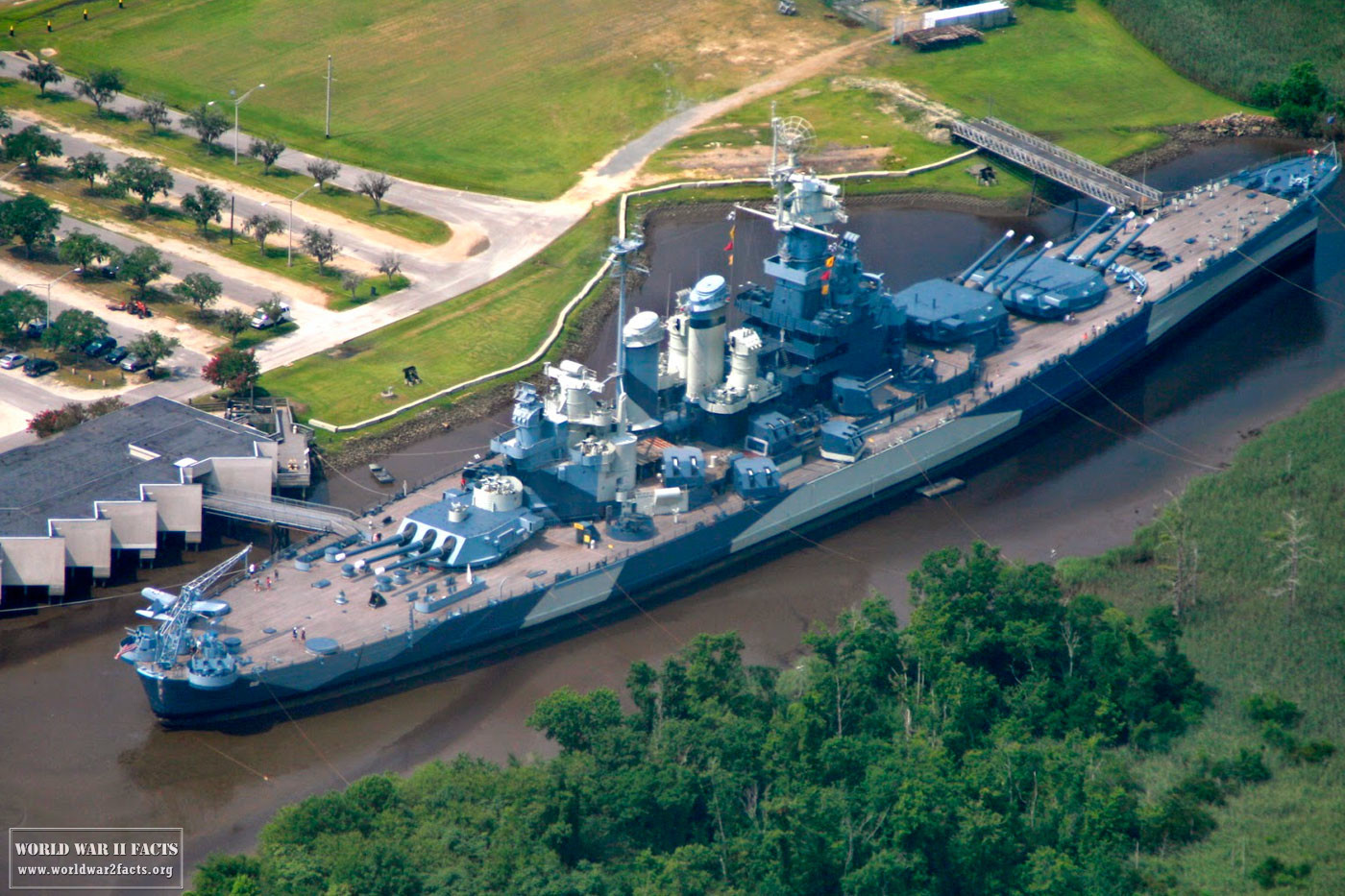 The North Carolina was the first new battle ship to be built by the United States in just over two decades and was limited to a displacement of < 35,000 long tons by the Washington and London Naval Treaties. Her beam was limited to 110 feet due to the width of the Panama Canal at the time and the draft was limited to no more than 38 feet to ensure that the ship could make use of as many ports and shipyards as possible and proved to be a challenge to naval architects to design.  In order to save weight, the North Carolina made use of new techniques of welded construction and featured four main spaces that contained two boilers and one steam turbine in each. Each main space was responsible for driving one of the four shafts on the ship and the arrangement helped reduce the total number of openings in the bulkheads on the ship, saved space, and reduced overall weight of the ship.

Harbor. For most of 1942, North Carolina was kept on the eastern coast of the United States for a potential show down with the German battleship, Tirpitz. This battle never occurred, and the North Carolina was ordered to the U.S. Pacific Fleet in the summer of 1942.

The ship transited the Panama Cana on June 10th, 1942 shortly after the conclusion of the Battle of Midway. North Carolina stopped at the ports of San Pedro, California and San Francisco before proceeding to Pearl Harbor, Hawaii. On July 15th, 1942, North Carolina left Hawaii with the Enterprise, heavy cruiser Portland, light cruiser Atlanta, and eight destroyers to seek out combat in the South Pacific Ocean.

On August 7th, 1942, the North Carolina assisted in the Battle of Guadalcanal and was the only U.S. battleship active in the South Pacific at the time. She aided in screening the Enterprise who provided air support for the Guadalcanal landings. Later she took part in the Battle of Eastern Solomon’s on August 24th.  During the battle, the North Carolina shot down between seven and 14 Japanese aircraft. During the battle, the volume of fire from the North Carolina was so dense, officers of the carrier Enterprise asked, “Are you afire?,” which was not the case. During the engagement, the ship fired more than 840 rounds of 5-inch ammunition, 1,037 rounds of 1.1 inch ammo, 7,425 rounds of 20 mm shells, and 8641 rounds of 50 cal machine guns.

Following the battle, North Carolina shifted to protect the U.S. carrier, Saratoga during the ongoing engagements on Guadalcanal. On two occasions, North Carolina was attacked by Japanese submarines ; once avoiding a torpedo hit through ship maneuvers, and the second time taking a hit on the port side blowing a 32 ft by 18 ft hole in the side of the ship and killing five men. The USS Wasp and O’Brien were sunk by torpedoes during this attack. The sailors on the North Carolina were able to correct a 5.6 degree list and keep the ship in formation and battle ready after the strike. After undergoing repairs in New Caledonia, the ship was dry-docked in Pearl Harbor for hull repairs and to upgrade the anti-aircraft armament. Quickly sent back to sea, the North Carolina took on duties to screen the Saratoga and Enterprise until being taken back to Pearl Harbor in March – April 1943 to obtain advanced radar and fire control upgrades before leaving for the Gilbert Islands in September of 1943.

On November 10th, 1943, the North Carolina sailed from Pearl Harbor as part of the Northern Covering Group with the carrier, Enterprise. The group conducted air strikes on November 19th in support of the assaults on Makin, Tarawa, and Abemama for 10 days. The North Carolina provided supporting fire on Nauru on December 8th, 1943 helping destroy beach defense revetments, radio installations, and air facilities. Later in the month, the battleship helped protect Bunker Hill with strikes against airfields and shipping at Kavieng, New Ireland. The ship would then join Task Force 58 under command of Rear Admiral Mitscher at Funafuti, Ellice Islands.

During the Battle of the Marshall Islands, the North Carolina screened the aircraft carriers from air attack during the pre-invasion strikes, provided close air support air shore, and fired on targets in Kwajale, Namur, and Roi where she was credited with sinking a cargo ship in the lagoon (Roi). Following this action, she was responsible for protecting carriers during the strikes on Truk, and then helped fend off an attack against the Carriers near the Marianas on February 21st prior to the force conducting strikes on Saipan, Tinian, and Guam. During most of this timeframe, the North Carolina served as the flagship for then Rear Admiral  Willis A. Lee, Jr, Commander Battleships Pacific (later promoted to Vice Admiral).

At this point, North Carolina was using Majuro as her base of operations and helped join in the attacks on both Palau and Woleai that took place between March 31st and April 1st and shot down an enemy aircraft during the operation. The force then provided support

for the capture of Jayapura (known as Hollandia at the time) in New Guinea between April 13-24th , followed by a raid on Truk from April 29th-30th where she dropped another aircraft. After destroying coastal gun emplacements and airfields at Ponape, the North Carolina departed for Pearl Harbor to conduct rudder repairs.

On June 18th, the North Carolina proceeded to take part in the Battle of the Philippine Sea and shot down two of the Japanese aircraft that made it through the American CAP. During the battle, three of the Japanese carriers were sunk and no American ships were lost. The ship would support air operations in the Marianas for another two weeks before sailing to conduct overhaul at the Puget Sound Naval Yard. She would ultimately rejoin the U.S. carrier force off of Ulithi on November 7th, 1944 when Typhoon Cobra struck the force. As the ships fought through the storm, the would subsequently carry out attacks against Luzon, Leyte, and the Visayas. Later that month, the North Carolina would fight off their first kamikaze attack.

During this timeframe, the North Carolina would continue to screen the U.S. carriers while the Americans would proceed to assault Mindoro on December 15th, 1944. Three days later, the force would sail through another typhoon that resulted in the loss of three American destroyers. The North Carolina would continue to support operations involving strikes on Formosa, the coast of Indo-China and China, and the Ryūkyūs in January of 1945. The strikes conducted on targets in the Japanese home islands, helped to support the eventual Battle of Okinawa assault by the Americans where North Carolina provided both shore bombardment and carrier screening. On April 6th, 1945, she shot down three kamikaze air craft, but took damage from a friendly 5” round resulting in the deaths of three

sailors and 44 wounded. After this, the Japanese battleship, Yamato, proceeded south along with her escorts, but was sunk. The North Carolina would shoot down one Japanese aircraft on this day, and two more on April 17th, 1945.

Once the battleship underwent overhaul at Pearl Harbor, she rejoined the carrier force for a month of naval and air strikes against the Japanese home islands. During this time, the North Carolina took part in firing on major industrial plants near Tokyo as well as saving a downed carrier pilot under heavy fire from Tokyo Bay (via her scout seaplane).

As the war closed, the North Carolina sent members of her crew and embarked USMC detachment ashore for occupation duty. She would patrol off of the cost until anchoring in Tokyo Bay on September 5th to retrieve her men. The ship would embark passengers in Okinawa and departed for the United States. The North Carolina reached the Panama Canal on October 8th, and anchored off of Boston on October 17th. Once conducting another overhaul in New York, she would embark U.S. Naval Academy Midshipmen for a summer training cruise in the Caribbean Sea.

Today, the ship is open to visitors where one can tour the main deck, some of the gun turrets, and many of the interior spaces of the ship for a small charge. One of nine surviving OS2U Kingfisher aircraft in the world which still function are located on the stern of the ship, and a Roll of Honor in the ship’s wardroom lists all of North Carolinians who died in service of their country during World War 2. 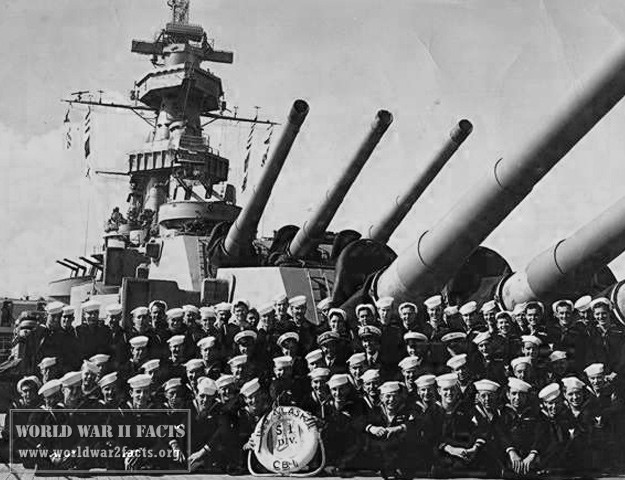 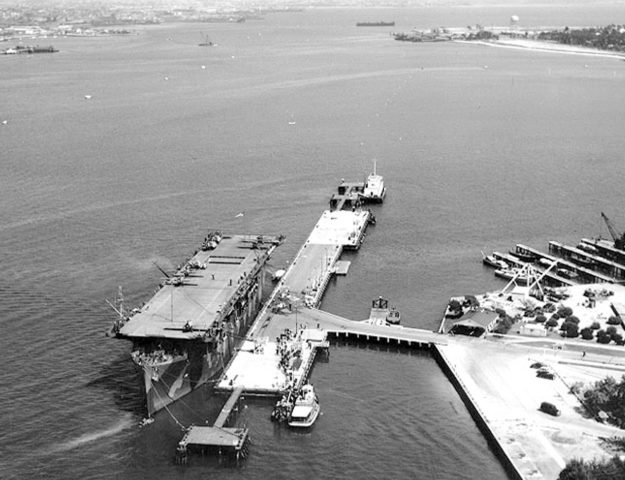