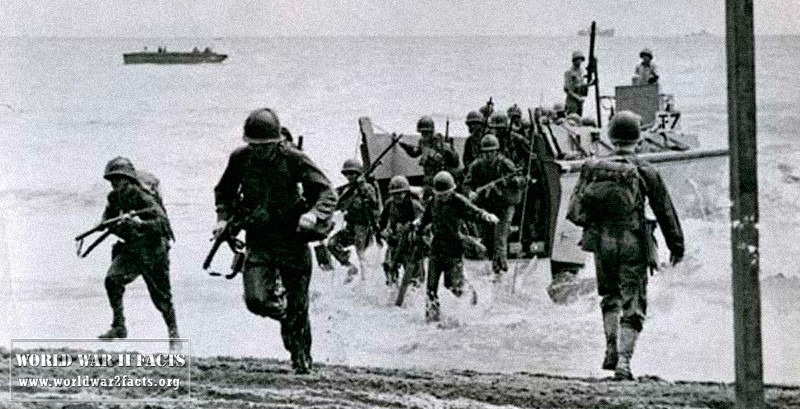 When the Allied forces landed on Guadalcanal and the other islands they quickly overwhelmed the Japanese forces and captured the islands of Tulagi and Florida together with an airport that the Japanese had under construction. The landing was supported by considerable U.S. naval forces.

Taken by surprise by this offensive the Japanese tried to retake the airport that was now renamed to Henderson Field. The islands in question here had no value by themselves, but they were strategically important for both sides of the conflict. If the Americans could gain control of them they would be able to protect the transport between Australia and the U.S. and it would give them a place from where they could launch an attack on the Japanese forces in the Pacific. In Japan not everyone agreed on the strategic value of these small islands. Many senior officials thought it would be best to get their army, which was already stretched too thin to defend what they already had. It was decided that backing down would only be seen a sign of weakness. After that the Japanese launched an attack on the Solomon islands with the goal of establishing an army and naval base there and by May 1942 the Japanese landed at Guadalcanal.

US Admiral Ernest King wanted to launch a full-scale attack and his plan seemed to be simple enough. The 1st division of the US Marines would get to Guadalcanal and secure a beach there for the other US forces. The problem was that the 1st division had a lot of officers with no combat experience. When they finally arrived they didn’t get any chance to work with the naval force that would accompany them into action and to make matters worse they didn’t have reliable tie charts, maps and so on. Because of this the attack was postponed several times.

Finally on the 7th of August the American attack on Guadalcanal began. It was quite an impressive ensemble. It was the most powerful amphibious force ever, up to the battle of Guadalcanal. There were 3 carriers giving air support, with the support of 25 other ships for protection of the carriers.

To the Japanese the attack was a complete surprise. When the Marines arrived at Red Beach they were expecting to find major defenses

but there wasn’t anything of the sort. When the Americans started going inland towards the airfield under construction they discovered another huge problem. The hot and humid jungle, the Americans were carrying a lot of equipment and the climate quickly took it’s toll on them but in the first 24 hours of the landing there was no actual fitting between the Americans and the Japanese.

The marines that landed on the islands of Tulagi, Guvutu and Tanambogo but the Marines that landed north of Guadalcanal weren’t so lucky. Very quickly the Marines found strong Japanese resistance and it took them 24 hours to secure Tulagi. American paratroopers had similar experiences when they landed on Gavutu and they actually needed help from nearby naval ships to secure the island.

The Japanese sent more and more troops and even a ship but all of them were defeated at the hands of the Americans. When this news reached Tokyo they simply refused to believe that they could lose time after time so they sent more and more men to the battle of Guadalcanal. In November 1942 U.S. planes destroyed Japanese ships that were bringing reinforcements to Guadalcanal. Of the 11 transport ships that the Japanese sent to Guadalcanal six were destroyed and four were beached.

Finally, in December 1942 the emperor ordered the Japanese troops to withdraw from Guadalcanal. The soldiers were being withdrawn from January to February of 1943 but there was another lesson to be learned, Japanese don’t become any softer when defeated. The American victory in the battle of Guadalcanal was important to the war effort, because it secured the safety of Australia from Japanese invasion. This would once again protect the sea route from America to Australia.

The following references were used in writing this article and may prove helpful for those looking for additional information on the battle:

Tully, Anthony P. (1997). “Death of Battleship Hiei: Sunk by Gunfire or Air Attack?”. Retrieved March 9th, 2013. Article on the battle of Friday the 13th that gives additional details on the demise of Hiei.