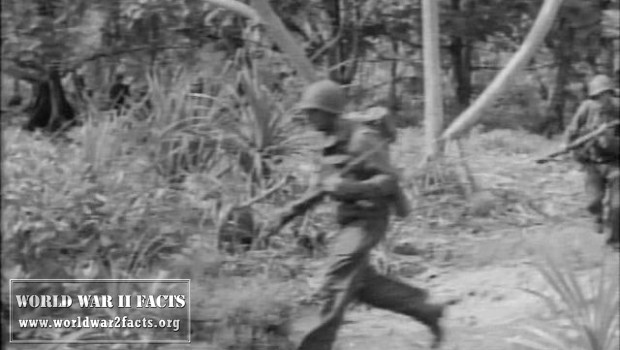 If you want to know about the US involvement in the Pacific during World War II, then this series, “Crusade in the Pacific: America at War is it.  I can’t say I’ve seen a more exhaustive chronicle of the Pacific Theater, from a US-centric point of view, of course.In 24 separate episodes roughly 30 minutes each, ‘Crusade’ journals the War through tons and tons of basically uncensored stock footage, along with the timeless voice of Westbrook Van Voorhis.  You’ll know the voice when you hear it.  (Or you’ll have flashbacks of all those elementary school films!)

What is it that makes this series so interesting?  I really can’t put my finger on it.  Admittedly, it is 100% US centric, although it does make acknowledgement in several places to the British, Chinese, and Australian contributions.

Furthermore, it doesn’t simply start at Pearl Harbor and end at Nagasaki.  The first three episodes are dedicated to events and conditions prior to Pearl Harbor.  The final three** (more on this later) deal with the surrender and occupation of Japan, the growing Communist tendencies in the region, culminating with the then-current events of the Korean War.

The biggest draw on this, for me anyway, was the completeness of it.  Very little was left “on the floor.”  From the Aleutians, to Burma and India, to Okinawa and all points in between.  This covers it. Seriously, the amount of information and detail presented is really awesome.  Never to the point of overwhelming, but never boring or “fluffy.”  Admittedly it took me a long time to finish the series, mainly due to the length!  One or two here or there…. you know.  It’s very handy for those “I need something good to watch for the next 25 minutes!!!” moments.

Drawbacks?  If not for one thing, I would whole-heartedly recommend this as a teaching tool for the classroom.  What is that?  The matter-of-fact and sometimes gratuitous display of corpses.  Usually enemy bodies (but not always), usually disfigured or otherwise non-dignified….  The manner in which this comes across is really quite stark and achieves the purpose at each moment, which is to show just how nasty each of the respective battles could get.   And, I suspect, that the memory of these events would have still been fresh for a lot of people, so it was a little more palatable to see plenty of dead enemy Japanese….  Unfortunately.  The only saving grace is that it is 100% black and white, so the real brutality of these images is attenuated somewhat.  It’s somewhat shocking to me that this would “clear” the various censoring agencies of the time, unless it never saw wide distribution and wasn’t governed…. I really can’t say.  It is interesting that the series does not carry the usual (in my opinion) overly harsh racist overtones that were present.  Maybe I didn’t see them, but as I said, its all very “matter of fact.”

** I say the “final” three, because I wonder if there are more episodes out there that have been lost to the ravages of time.  Episode 24 ends with a teasing of Episode 25….  which isn’t there!  I don’t know if it just never existed, or episodes past this point were lost…..  If anyone knows for sure….

Something else I have to comment on is the intro and “outro” music.  I’m not sure who came up with it, or whatever, but if I had to choose a piece of music that screamed “1951 war documentary!!!” more than this… I’m not sure I could.  You’ll find yourself humming along later.  Trust me.  It’s almost humorous its so “majestic” in a hymnal sort of way… but today it definitely seems “chest pounding” over the top.

So, put on your time-travelling clothes, place yourself in 1951 and soak it up.  Crusade in the Pacific: America at War is definitely a trip through the wayback machine, but one that is well worth the time invested, if you’re interested in such things.  My recommendation would be to watch this before diving into a more modern series such as “The Pacific.”  Events and references in that make more sense when viewed through a lens like this.

Here’s but a taste.  Just search YouTube for “Crusade in the Pacific.”  All 24 existing episodes appear to be up there.  Be educated!