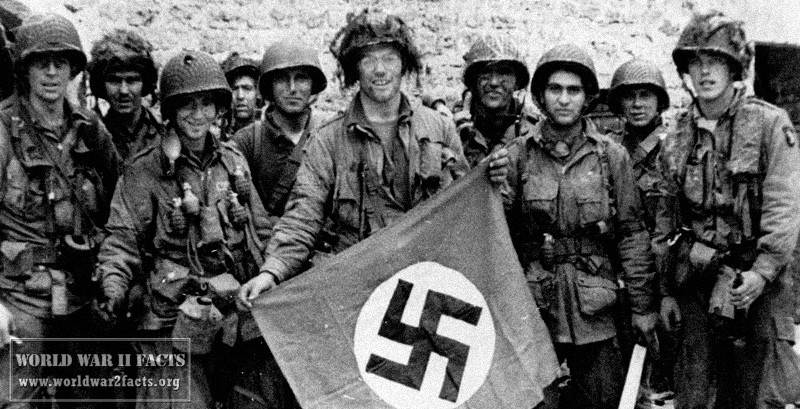 One of the most well-known companies in the United States Army is Easy Company, of the 2nd Battalion of the 506th Parachute Infantry Regiment, of the 101st Airborne Division (the Screaming Eagles). The company was formed in 1942 as part of an experimental airborne regiment and fought in the European Theater of World War 2. Major battles the company saw action in include: Operation Overlord (Battle of Normandy), Operation Market Garden, Operation Pegasus, the Battle of the Bulge, and Occupation Duty at Hitler’s Eagle Nest and later Austria.

Why Is Easy Company So Well Known?

Stephen Ambrose book, Band of Brothers (1992) by the same name. 20 of the last remaining survivors from the company during WW2 contributed to tell their stories in an oral-history book project in 2009 called: We Who Are Alive and Remain: Untold Stories From the Band of Brothers. The book was published by Penguin/Berkley- and credit for the authorship of the text is given to journalist Marcus Brotherton.

The oral history helps trace the life stories of the 20 contributors from the time of their basic training through the major operations or campaigns they participated in during the Great War. Included at the end of the book are three essays from the adult-children of deceased members of the company. The oral history was on the New York Times Extended Bestseller listing for hardcover nonfiction during the week of June 28, 2009.

The Formation of Easy Company

In 1942, the 506th PIR (Parachute Infantry Regiment) was created at Camp Tocooa, Georgia and included Easy Company. The regiment was considered an experimental airborne regiment with the primary mission of parachuting from C-47’s over hostile territory. During the original organization of E Company (Easy Company), there were three rifle platoons and a HQ (headquarters) section. Each of the platoons was to contain 3 x 12 man rifle squads as well as a six-man mortar team squad. There was also one machine gun attached to each of the rifle squads of Easy Company as well as a 60 mm mortar in each mortar team.  A unique part of the company’s PT (physical training) was conducting formation runs in 3 x 4 column running groups to help encourage the unit to work as a team.

The men of Easy Company saw action in some of the largest campaigns or battles of World War 2. These include: Operation Overlord, Operation Market Garden, Operation Pegasus, Battle of the Bulge, Occupation Duty at Hitler’s Eagle’s Nest, and Austria.

Easy Company saw major action during Operation Overlord (Battle of Normandy or D-Day). During the operation, the company was given the mission to capture the entrances to “Causeway 2” that was a route off of Utah Beach for the soldiers landing from sea a few hours after the company was tasked to secure and remove obstacles on the route. The men left the Upottery airbase located in Devon, England early in the morning on June 6, 1944. Once gathering or assembling on the ground, Easy Company disabled four heavy German machine guns threatening Allied forces moving along the Causeway 2 route.

After the Battle of Normandy, Easy Company’s men would find themselves assigned to support British forces in the Endhoven, Holland vicinity. Their mission was to defend the roads to allow British armor to advance into Arnhem and cross the Rhine River in September of 1944 as part of Operation Market Garden.

Following Market Garden, the company participated in the rescue of more than 100 British soldiers who were trapped outside of

Arnhem called Operation Pegasus. The operation was carried out near the village of Renkum on the Lower Rhine in the Netherlands overnight from October 22-23, 1944. The men of Easy cross the river as part of the operation, but when they reached the north bank realized that the objective (the British and other Allied soldiers) were more than 500 meters upriver of where they crossed. Easy Company maneuvered to rescue the men, and completed the evacuation in approximately 90 minutes once reaching the correct location. After the operation was completed, the British soldiers were later flown back to the UK.

The 101st Airborne Division (including the men of Easy Company) fought in the Battle of the Bulge in Belgium from December 1944 to January 1945. In December, the 101st was located in France when the German army launched their Ardennes offensive. The men of Easy Company departed France on December 18th for Bastogne, and started their now famous defense of the area surrounded by Germans on December 19 under orders to hold the area. The men continued fighting for 28 days in cold weather without winter clothing and limited supplies until reinforced with armor and resupplied.

During the defensive action, one of the more famous quotes to come out of the European Theater of World War 2 was attributed to the 101st Commander, General Anthony Clement McAulifee. During the battle, he received the following demand for surrender from the German commander fighting the 101st and the men of Easy Company:
To the U.S.A. Commander of the encircled town of Bastogne.
The fortune of war is changing. This time the U.S.A. forces in and near Bastogne have been encircled by strong German armored units. More German armored units have crossed the river Our near Ortheuville, have taken Marche and reached St. Hubert by passing through Hompre-Sibret-Tillet. Libramont is in German hands.
The German Commander.

After a short discussion with his staff, General McAulifee sent the following reply to the German Commander:

To the German Commander,
“Nuts!”
The American Commander.”
When COL Harper, the Regimental commander was asked to explain the meaning of the reply by the German officer taking the message back to the German HQ, he replied that it was the equivalent of “Go to Hell.”

Occupation Duty at Eagle’s Nest and in Austria

At the end of World War 2, the men of Easy Company found themselves assigned to occupation duty at Hitler’s famous Eagle’s Nest in Berchtesgaden. After spending time in this location, the company was moved to Austria for additional occupation duty and a variety of patrol assignments until the end of the war.

The 506th PIR to include Easy Company was disbanded in November of 1945. The unit would later be re-activated in 1954 in a training capacity.

Today, the men of Easy Company from World War 2 have one official website designed to help to accomplish four goals: 1 – To honor the dead by any means possible, 2 – To educate others on why they fought and about the cost of freedom, 3 – To visit hospitals and rehab centers for wounded soldiers and vets, and troop installations in the US and abroad, and 4 – To have yearly reunions. The non-profit association formed by the veterans asks that any who are interested in helping with their education goal contact them at info@menofeasycompany.com.