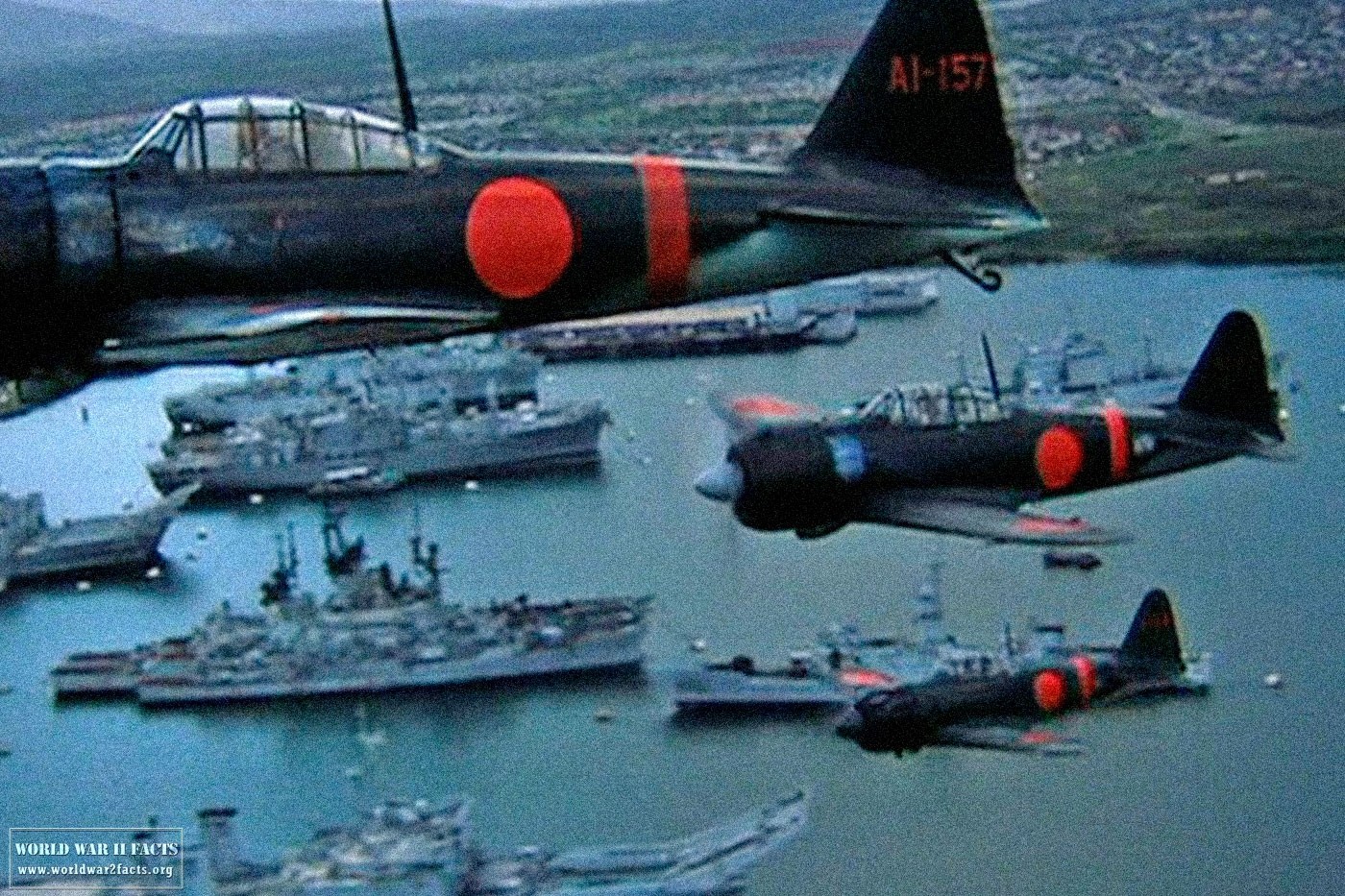 On December 7th, 1941 at 0755 local time, the Japanese commenced the attack on Pearl Harbor. The Imperial Navy forces that took part in the attack included four heavy aircraft carriers, two heavy cruisers, two light cruisers, nine oilers, two battleships, 11 destroyers, and 35 submarines. Although the attack resulted in a tactical victory for the Japanese, they missed

attacking the United States carriers who were not in port on the day of the attack. This article focuses on highlighting many of the Pearl Harbor facts that have emerged over time as Americans continue to remember those who sacrificed their lives in service of the country on December 7th.

The Japanese sent two waves of attacking forces to strike Oahu. The first wave of aircraft consisted of 183 aircraft that included 43 fighters, 51 dive bombers, 49 level bombers, and 40 torpedo planes. The subsequent attack wave would consist of 170 Japanese aircraft. 54 of the aircraft in the second wave would consist of level bombers, 36 were fighters, and 80 dive bombers. In total, more than 350 Japanese aircraft were used in the attack against Pearl Harbor that took the United States by surprise. More than 2,000 American servicemen would lose their lives in the attack.

The following is a collection of 24 facts about the attack on Pearl Harbor by the Japanese Imperial Navy during World War 2. There is not attempt to label the facts in any order of significance. Please feel free to add your own facts in the comments section of this article.

#2 – Although the Japanese aerial attack was successful, the Imperial Navy submarines failed to sink any of the damaged ships inside of the harbor.

#3 – The Japanese were just as surprised as the Americans on how successful the attack on Oahu / Pearl Harbor would be.

#4 – There are 23 sets of brothers who died onboard the USS Arizona (out of 37 total pairs or trios of brothers assigned to the ship). Only one full set of brothers survived the attack, Kenneth and Russel Warriner.

#5 – All the members of the U.S. Navy Band Unit 22, embarked on the Arizona, were killed during the attack (21 members in

total). The Arizona accounted for approximately half of all deaths from the attack with the ship being hit four times by Japanese bombers before sinking. This is the only time in American military history that an entire military band has been killed in action.

#6 – The USS Arizona continues to leak fuel to this day into the waters in Pearl Harbor. Many people think this is a myth; however, analysis has shown that the Arizona still leaks up to nine quarts of fuel / oil into the harbor every day. This is due in part to the ship taking on 1.5 million gallons in fuel on December 6th, 1941 prior to the attacks on the 7th. It is assessed that there is approximately 500,000 gallons of fuel still onboard the ship, slowly leaking out. The oil that commonly leaks out is also referred to as “black tears” or “tears of the Arizona.”

4. Some former crewmembers have chosen the USS Arizona as their final resting place. The United States Navy has permitted survivors of the Arizona to be interred in the wreckage of the ship on their deaths. In these cases, the military member receives a full military funeral at the Arizona memorial. The cremated remains are then placed in an urn that is deposited by divers underneath the gun turrets of the ship. More than 30 Arizona crewmen have chosen the ship as their final resting place. For crew that served onboard the ship prior to the attack, the U.S. Navy allows them to have their ashes scattered above the wreck site. By the end of 2011, only 18 of the 355 Arizona survivors are known to still be alive.

#8 – Elvis Presley helped get the USS Arizona Memorial built. Although the Pacific War Memorial Commission was established in 1949 to help create a permanent tribute to those who lost their lives in the attack on Pearl Harbor, it was not until 1958 that President Eisenhower signed legislation to create a national museum. The funds were a mix of both public and private money to include a benefit concert performed by Elvis at the Pearl Harbor Block Arena. The concert raised more than $50,000 that represented more than 10 percent of the total cost of the Arizona Memorial. The monument would be dedicated on May 30th, 1962 and sees more than one million tourists per year.

#10 – The first wave of Japanese attack aircraft took off at 0600 Hawaii time. In total, the two waves of Japanese aircraft would hit 18 United States Navy ships located in the harbor.

#11 – Then U.S. president, Franklin D. Roosevelt is attributed with stating that, “ December 7, 1941, a date which will live in infamy,” when talking about the attack against the United States at Pearl Harbor.

#13 – The American carriers, Lexington, Saratoga, and Enterprise, escaped damage from the Japanese attack since they were underway on December 7th, 1941.

#14 – More than 180 United States military aircraft were destroyed during the attack.

#15 – United States government officials were aware than attack from Japan was probable, but didn’t know when or where it would occur.

#16 – The primary targets of the first wave of Japanese aircraft were the American battleships and airfield.

#18 – Anti-aircraft guns were initially unmanned due to Pearl Harbor not being in a state of high alert when the attack began.

#19 – There is 10 square miles of navigable water in Pearl Harbor (located on the southern coast of Oahu) which is also the headquarters of the U.S. Pacific Fleet.

#20 – The day after the attack on Pearl Harbor, both the United States and Great Britain declared war on Japan.

#21 – The U.S. President at the time of the attack on Hawaii was Franklin D. Roosevelt.

#22 – Due to the low state of readiness of the U.S. Navy and military in Hawaii, Admiral Husband Kimmel and General Walter Short were relieved of duty.

#23 – Of the eight battleships struck by the Japanese during the attack, all but the Oklahoma and Arizona were ultimately repaired and returned to service during WW2.

#24  – When the United States Congress voted to declare war on Japan, the only vote against the action was Representative Jeannette Rankin of Montana.