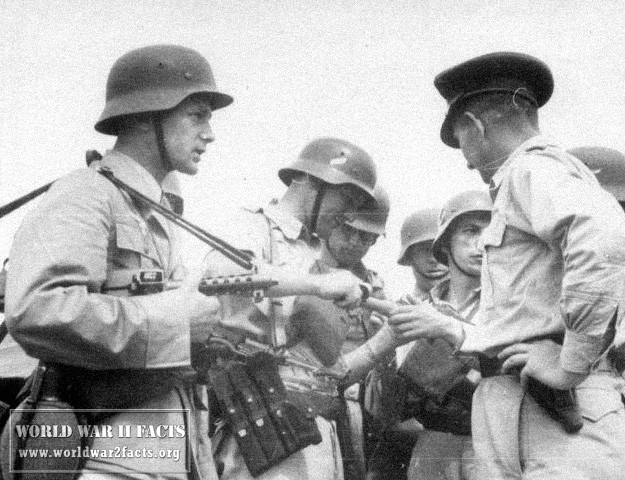 The Battle of Crete started on 20 May 1941 when Germany launched an airborne attack on the island of Crete. The battle was fought between Germany and Italy on the Axis side and Greece, the civilians on the island, and the rest of the Allies on the other. The battle concluded after approximately 10 days with the Axis powers in control of the island.

Crete was occupied by the Allies when Italy attacked Greece in 1940. The Allies managed to repel the Italians in the initial invasion but Germany provided aid to the Italian attack and they drove some 57, 000 of the Allied troops from the mainland. Some of the troops that were evacuated from the mainland were sent to Crete to increase the strength of the troops on the island.

Having control of Crete was an important strategic advantage for the Royal Navy because it gave it important harbor in this part of the Mediterranean, which could be used against the Axis. Another advantage of the island was the when sent from it the bombers of the Allies were in range of the Ploiesti oil fields in Romania which were extremely important for the Axis. Winston Churchill thought that it would be a crime to lose Crete because of insufficient forces.

German high command had its hands full with the organization of Operation Barbarossa, the invasion of the Soviet Union but some of the senior officials in the Luftwaffe liked the idea of winning Crete using an airborne attack. This was probably due to their defeat at the hands of the Royal Air Force in 1940, especially when one considers that they should have focused their forces on the upcoming invasion of Russia. When they presented the proposal to take Crete Hitler was won over by the daring proposal. His conditions were that the Battle of Crete had to be carried out in May and that the battle can’t interfere with Operation Barbarossa.

The first thing the Luftwaffe did was establish air superiority, to do this they bombed the island frequently, and eventually they accomplished their goal, the Royal Air Force moved its planes to Alexandria. When the land battle came into play both sides had certain advantages, the Allies had more troops and their naval fleet was stronger but the Germans had air superiority and they were more mobile which in the end allowed them to focus their forces more effectively.

Most of the commanders of the operation agreed that the primary objective should be to take Maleme, Major-General Kurt von Student wanted for his paratroopers to cover a larger area to increase the element of surprise but the other commanders wanted a concentrated attack. Maleme was chosen as the primary target because it had several advantages over other strategies, it was the biggest airfield and it could be used to land heavy transports that would bring the reinforcements necessary to take the island for good and another important factor was that it was close enough to the mainland which would allow it be covered by fighters and it was also relatively near the coast which would allow for seaborne reinforcements to be brought in if the need arises.

After the first day of fighting the German casualties was extremely high and to make matters worse for them they didn’t even accomplish any of their objectives. The next day, the Germans captured Maleme airfield, many attribute this to the miscommunication on the Allied part, according to many historians the Allies simply didn’t understand what was going on and that allowed the Germans to capture the airfield which allowed them to get in more reinforcements and ultimately defeat the Allies.

Why was the Battle of Crete Important

After capturing Maleme and flying in reinforcements The Axis was able to take Crete without much problem. The entire Battle of Crete

lasted about 10 days. There are several aspects that made the Battle of Crete unprecedented. It would be remembered as the first battle in which Germany would use paratroops as an invasion force on this scale but it was also the first invasion in military history that was mostly carried out by air.
From the Allies’ side, it was the first time that they really used intelligence gathered from decrypted Enigma code. Another first during the Battle of Crete was that it was the first time that a civilian population heavily resisted German attack. Because of the number of casualties suffered during this attack, Adolf Hitler banned airborne operations of this scale from being carried out.

The Allies, on the other hand, were rather impressed by the potential and possibilities of paratroopers that the Germans demonstrated, this lead the Allies to start creating their own airborne divisions. Losing Crete also forces the Allies to realize the importance of airfields, following the Battle of Crete the Royal Air Force was assigned the responsibility to defend its bases from both ground and air attacks.