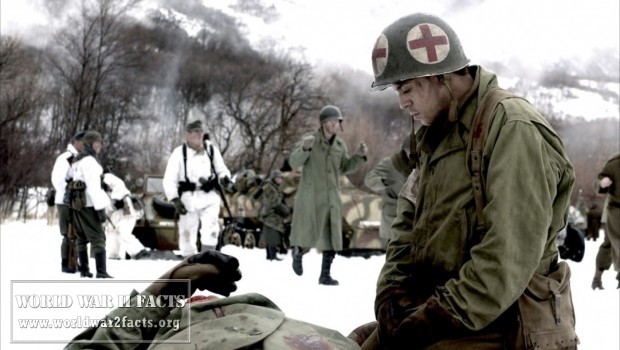 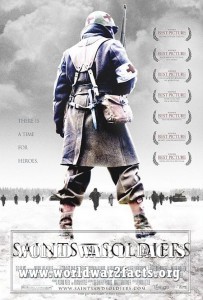 Saints and Soldiers is by far the best war movie I’ve never heard of before.  Yes, it really is that good.  Starting off with a frank depiction of the Malmedy massacre of Allied soldiers by the Germans, Saints continues on into an incredible story of humanity and survival.  This tale is at the same time beautiful, and incredibly difficult to watch.

Every aspect of this film just blew me away, from the acting from a band of relative unknowns, the soundtrack, the camera work, the writing and the direction.  Sure there were a couple of moments I winced, but nobody’s perfect, but this is really, really close.

Their mission, at least once they pick up Winley, is to get him and the important intelligence information he carries back into Allied hands.  However, things are never quite that simple, and frankly the mechanics of the plot aren’t what makes this film so great.

Saints and Soldiers is primarily an exploration of the men who fight, and that’s where Deacon comes in.  Deacon has, quite by accident, done some terrible things in this war, despite his clean-cut and straight-laced persona (hence the nickname “Deacon.)  Because of this, he’s suffering from a bout of shell shock, and at times puts the rest of his group in jeopardy.  Throughout the picture, Gunderson is looking after Deacon, trying his best to stick up for him, and keep him safe until he can get help.

Deacon also has been in Germany before, and has a certain connection with the people, as he was a missionary before the war.  As luck would have it, he runs across one of his former acquaintances, who helps them out of a predicament.

I could go into more detail about the plot, but I really don’t want to ruin it.  The story is one about humanity.  That we’re all more-or-less the same no matter which side we’re on.  That sometimes doing what’s right is more important.  Actually the film takes on an almost religious overtone at times, which is not a bad thing.  There are questions asked and discussed about what it means to be doing what they’re doing, what happens to us, how we find redemption from it.

The only complaint I can think of would be the soundtrack, which for the most part is an excellent compliment to the film, but at times borrows heavily in sentiment from “Saving Private Ryan.”  With the somber horns and snare rolls… when you hear it you’ll know what I mean.

Surprisingly for a modern war picture, there isn’t a lot of profanity, either.  Actually I’m struggling to remember a single instance.  You’ll see this film rated ‘R’ in some places, and the DVD I saw had a PG-13 rating on it.  That actually surprised me given the “frankness” of the opening scenes of the Malmedy massacre.

The performances from all were well beyond what I had expected from a little-known film like this.  In fact, their combined performance, along with the brilliant direction is what brings me to the final nine for this picture.  It’s a roller-coaster of emotion, and indeed suspense, and I’d rank the final “shootout” scene right up there with any scene from “Ryan” any day.

Hunt down and watch Saints and Soldiers, if nothing else to get a refreshing and different perspective on the business of war, and what it means to be in it