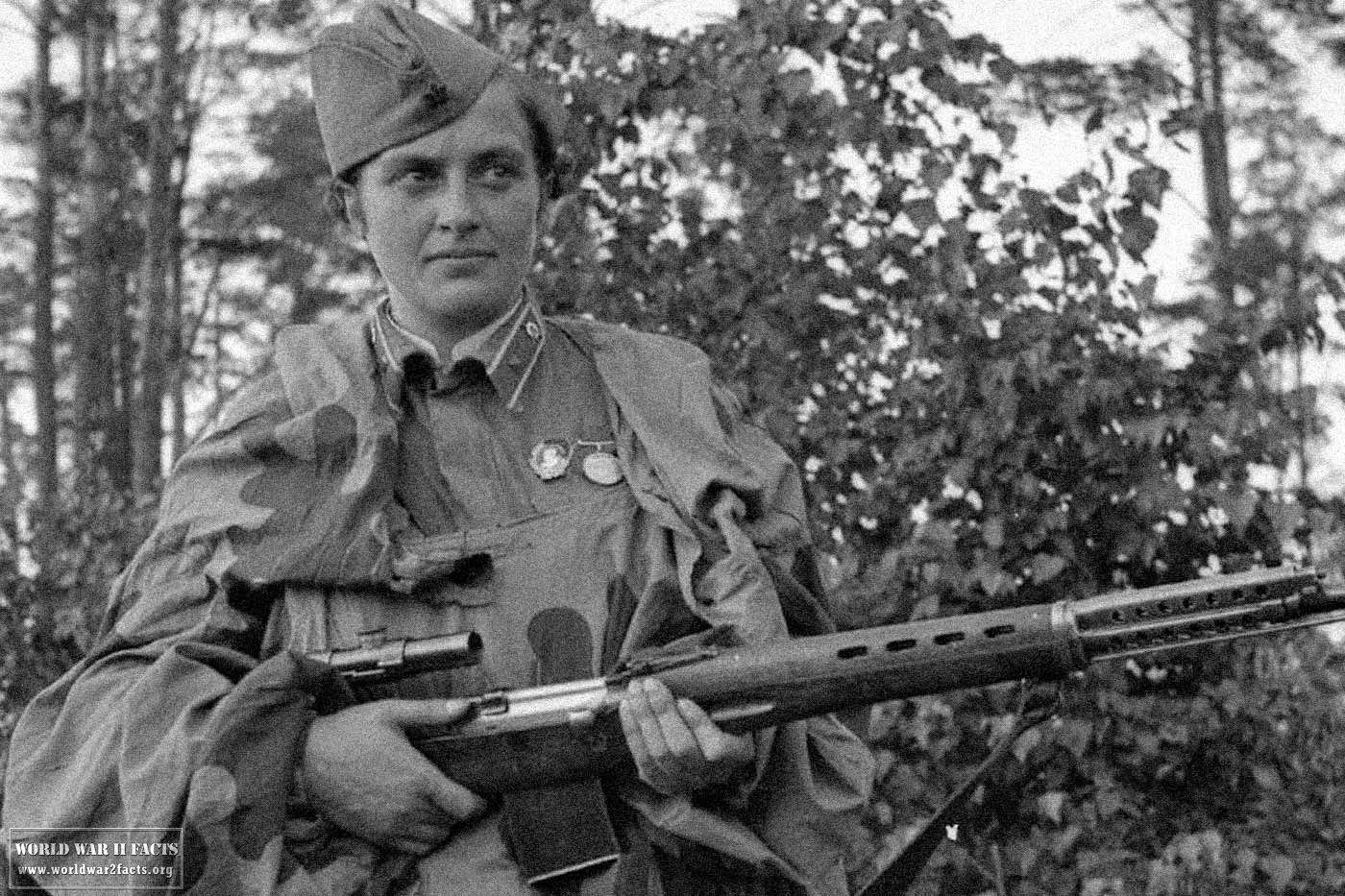 Lyudmila Pavlichenko was a Soviet sniper, the Ukrainian “Lady Death”.

Lyudmila Pavlichenko was a sniper for the Soviet army during World War 2. She is credited with 309 kills during the war and is regarded as the most successful female sniper in military history. She was born in Ukraine, and lived from July 12, 1916 to October 10, 1974.

Lyudmila Pavlichenko was born in the Ukrainian town of Belaya Tserkov (or Bila Tserkva) on July 12, 1916. She moved with her family to Kiev when she was 14 and joined a local shooting club. While developing into a sharpshooter, she worked as a grinder at the Kiev Arsenel factory. At the age of 21, she successfully defended her thesis on Bohdan Khmelnytsky at Kiev University.

When Pavlichenko was 24 in 1941, Nazi Germany started its invasion of the Soviet Union. She would be among the first of the volunteers to join the Red Army and  she requested to join the infantry. At first, she was pushed to become a nurse; however, she refused. In a quote attributed to Pavlichenko: “I joined the army when woman were not yet accepted.” She would then be assigned to

the Red Army’s 25th Rifle Division and would become one of the 2,000 female snipers in the Red Army. Of these 2,000 assigned, only 500 would live to see the war’s end. Her first two kills made as a sniper were near Belyayevka making use of a Tokarev SVT-40 semi-automatic rifle that had a 3.5 telescopic sight. She worked with a spotter and her rifle fired a 148 grain bullet which travelled at 2,800 feet per second with an effective range of more than 600 yards.

At this time, Pavlichenko was the rank of Private and would fight for two and a half months near Odessa during which time she would record 187 official kills. After the German army gained control of the area, the Red Army moved her unit to Sevastopol located on the Crimean Peninsula. Pavlichenko would see action in this area for more than 8 months. The Southern Army Council cited now Lieutenant Pavlichenko in May 1942 for 257 German kills.

Just one month later (June 1942), Pavlichenko was wounded by mortar fire. Despite recovering, the Red Army pulled her from combat a month after her recovery. She would be credited with 309 confirmed sniper kills during World War 2 to include 36 Germany or enemy snipers.

After being pulled from the front lines, Pavlichenko was sent by the Soviet government to the United States and Canada for a publicity tour. She would become the first Soviet citizen to be received by a U.S. President when FDR welcomed her to the White House. Eleanor Roosevelt would later invite her to tour the United States to relate her experiences. She would appear before the International Student Assembly in Washington, D.C. and make appearances and  speeches in New York City. The U.S. government  presented her with a Colt automatic pistor and the Canadian government presented her with a sighted Winchester rifle (now on display at the Central Armed Forces Museum in Moscow). Pavlichenko was joined by Vladimir Pchelintsev (fellow sniper) and Nikolai Krasavchenko (Moscow fuel commissioner) during her trip to Canada where they were greeted by thousands of citizens in Toronto’s Union Station.

Now a major, Pavlichenko would never return to combat. After her overseas trips, she would become a sniper instructor until the end of the war. In 1943, she received the Gold Star of the Hero of the Soviet Union and would later be commemorated on a Soviet postage stamp.

The most commonly used sniper rifles by the Red Army in World War 2 were the Tokarev SVT-40, the Mosin- Nagant, and later in the war the SVD.

The sniper version of the rifle was used prior to WW2 until after the war. The rifle used a standard bold-action 1891/30 infantry rifle as a platform  with those picked for sniper use being hand-picked for their accuracy. 4x power scopes were added to the rifles using a PE scope (copy of a German Zeiss scope) manufactured by Emil Busch AG. A PEM model was later used which was easier to produce. The PU version of the rifle began production in 1942 and  included a simpler scope design that was earier to mass produce. This version of the rifle was the longest serving sniper rifle in the world and remained the primary USSR sniper rifle until 1962.

The Tokarev SVT-40 was designed as a replacement for the Mosin-Nagant rifles and was a semi-automatic rifle chambered for the same ammo as the Mosin-Nagant. Due to a number of problems with the rifle to include muzzle flash and accuracy issues as well as slow manufacturing timelines, production ceased on the SVT-40.

Following World War 2, Pavlichenko completed he education at Kiev University and was a research assistant of the Chief HQ of the Soviet Navy as a historian. She would become active in the Soviet Committeee of the Veterans of War and latered died at the age of 58 in 1974. Lyudmila Pavlichenko is buried in the Novodevichye Cemetery in Moscow.

Pavlichenko’s war record was recognized by the Soviet Union through issuing two commemorative stamps with her portrait. In the United States, folk singer Woody Guthrie composed a song as a tribute to her war record released as part of the Asch Recordings.