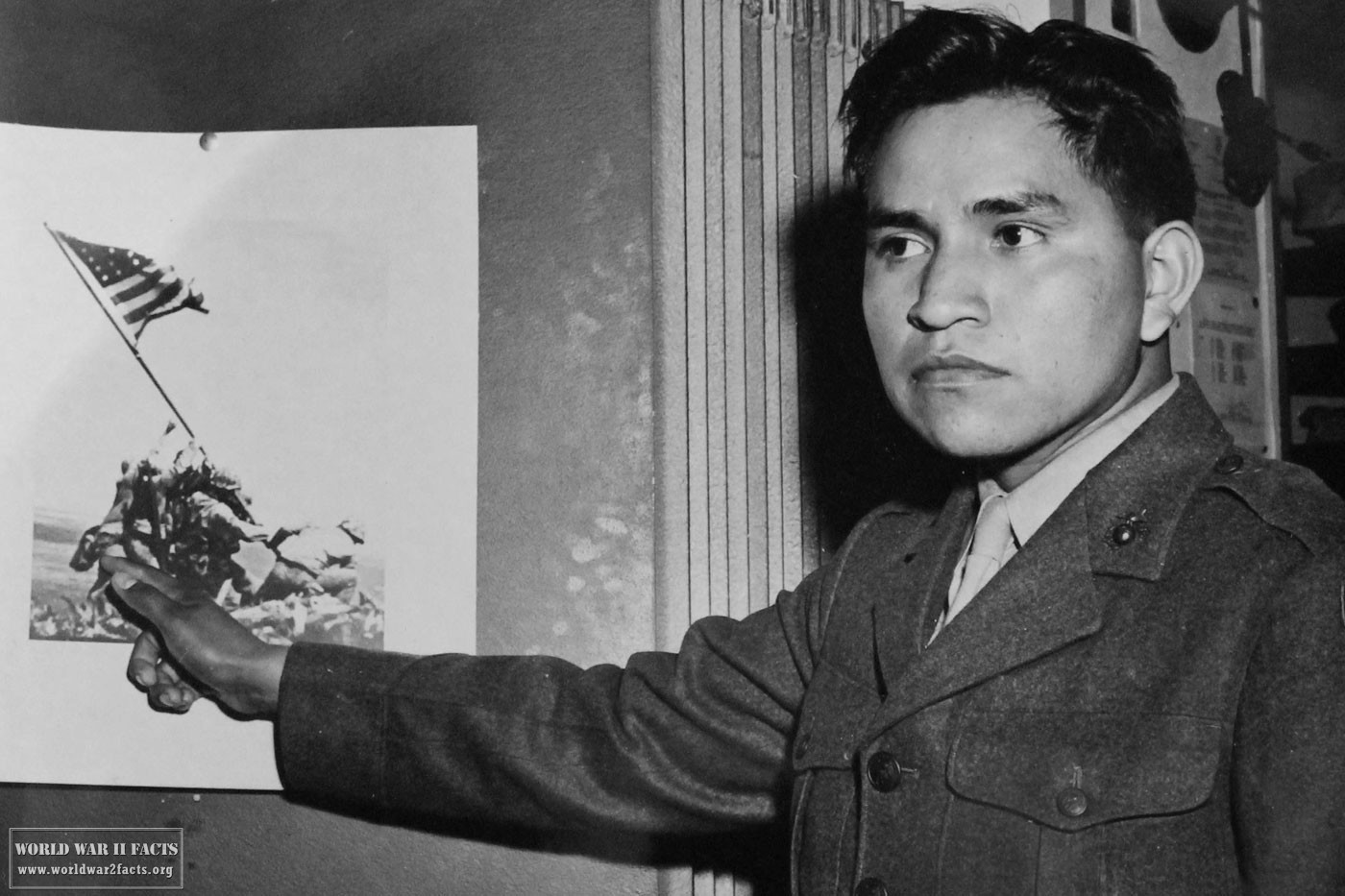 Ira H. Hayes with a copy of the Rosenthal photo, from the Bonhams collection (Valery Sorokin).

Ira Hayes was born on January 12th, 1923 and passed away on January 24th, 1955. He was a Pima Native American and more famously served as a United States Marine during World War 2. During the Battle of Iwo Jima, Ira Hayes was made famous by taking part in the flag raising on Iwo Jima on February 23rd, 1945 after being part of the initial invasion of the island on February 19th, 1945. He took part in the flag raising with fellow Marines: Harlon Block, Rene Gagnon, Franklin Sousley, Mike Strank, and Navy Corpsman John Bradley over Mount Suribachi. The raising was photographed by Joe Rosenthal and has become one of the most famous images of World War 2.

Ira Hayes received a number of military awards during his enlistment in the United States Marine Corps during World War 2. These include:
Navy and Marine Corps Commendation Medal with Combat “V”

The United States 5th Marine Division landed on the island of Iwo Jima on February 19th, 1945. Ira Hayes took part in the initial invasion of the island and was among the Marines who stormed and took Mount Suribachi from the Japanese forces just five days later on February 23rd, 1945.

After Joe Rosenthal took the picture of Hayes and the other Marines raising the second American flag on the mountain, Hayes become an overnight U.S. national war hero along with the other surviving members of the photo which included John Bradley and Rene Gagnon.

Once the island of Iwo Jima was ultimately secured by United States armed forces, Ira Hayes was subsequently ordered back to Washington, D.C. Once there, he was assigned with Rene Gagnon (USMC Private First Class), and Rene Gagnon (USN Pharmacist’s Mate First Class) to temporary duty with the U.S. Treasury Department’s Finance Division. During this assignment, Hayes and his counterparts were responsible for making appearances supporting the United States Seventh War Bond Drive.

Once World War 2 concluded, Ira Hayes attempted to lead a normal life. Despite his best efforts, he continually received fan mail and received visitors asking about the flag raising on Iwo Jima. Not too long after returning home, Hayes started to become upset or “troubled” that Harlon Block was not given credit for raising the flag on Iwo Jima (KIA several days after the action) and was mistaken for another Marine, Hank Hansen. In order to resolve the matter, Hayes would hitch hike more than 1,300 miles from the Gila River

Indian Community to the Block, Sr. farm in Weslaco, Texas to let the family know the truth of the matter. At the end of the day, Hayes was instrumental in getting the “confusion” over the proper identification in the picture sorted.

Several years later in 1949, Hayes would appear in the John Wayne film, Sands of Iwo Jims along with Rene Gagnon and John Bradley. In the movie, the actual flag used on the mountain was used and all three men would play themselves.

After the conclusion of WW2, Ira Hayes would be arrested 52 times for being drunk in public. He is attributed publicly to stating that he was “about to crack up thinking about all my good buddies. They were better men than me and they’re not coming back…”

As recently as 2006 in the Flags of Our Fathers movie directed by Clint Eastwood, it has been suggested that Hayes suffered from what is known today as posttraumatic stress disorder.

The Death of Ira Hayes

On January 24th, 1955, Ira Hayes was found dead in the am near an abandoned hut in Sacaton, Arizona during the morning. Previous to his death, he had been observed drinking and playing cards at a bar on the local reservation with his brothers Vernon and Kenneth along with a number of friends. During the night, Hayes and fellow Pima Indian Henry Setoyant got into a minor fight. Everyone left the scene except for Setoyant and Hayes.

The official coroner report from Pinal County stated that Hayes’ death was a result of alcohol poisoning and exposure; however, Kenneth Hayes states that he thinks the death came from the fight with Setoyant.

Today, Hayes can be found buried at Arlington National Cemetery in Section 34, Grave 479A. During his funeral, Rene Gagnon is attributed with stating: “Let’s say he had a little dream in his heart that someday the Indian would be like the white man — be able to walk all over the United States.”

November 10th, 1993 to commemorate the anniversary of the USMC and then Commandant, General Carl Mundy stated:

“  One of the pairs of hands that you see outstretched to raise our national flag on the battle-scarred crest of Mount Suribachi so many years ago, are those of a Native American … Ira Hayes … a Marine not of the ethnic majority of our population.

I would tell Ira Hayes that our Corps is what we are because we are of the people of America … the people of the broad, strong, ethnic fabric that is our nation. And last, I would tell him that in the future, that fabric will broaden and strengthen in every category to make our Corps even stronger … even of greater utility to our nation. That’s a commitment of this commandant … And that’s a personal commitment of this Marine.“

The “The Ballad of Ira Hayes” tells the story of Ira Hayes and of his becoming famous for being one of the flag raisers on Mount Suribachi during the Battle of Iwo Jima during WW2. Although recorded numerous times, the most popular version of the song was recorded by Johnny Cash on his self-titled 1965 album. Bob Dylan would later cover the song on his Dylan album released in 1973.

The Ballad of Ira Hayes Video