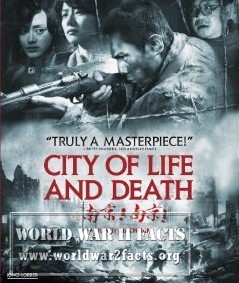 Quite frankly, this is the best, most brutal, most gut-wrenching war movie I’ve seen in a long, long time.  City of Life and Death is everything Schindler’s List could have been, should have been, and more.

From the beginning, you know you’re in for a different experience.  The initial combat sequence is one of the best in recent memory.  From the tangible fear and tension, to the under-produced yet blisteringly real sound and gritty no-nonsense direction….  There’s no lead-in apart from some brief narrative on postcards, it just happens.  It is what it is, and that’s part of what makes this such an incredible picture.  Events unfold without warning, seemingly without purpose, leaving us (and them) to wonder “what is next?!”

The black and white presentation of the entire movie only adds to the overall feel.  Not only that, but, for me at least, it tempers the graphic violence and inhumanity throughout, and really solidifies the message behind it.  What message?  “China will live on.”  This movie is about emotion, not about “how graphic can we make it.”

But I’m getting ahead of myself.

After the initial battle scene, the Japanese execute hundreds (more?) of prisoners outright.  Among them is a young boy, Xiaodouji.  He winds up in the “safe zone” for foreigners and embassy workers, along with Mr. Tang and his family, and another survivor (the name eludes me, bloody language barrier)….  From this point we watch as Tang and Rabe attempt to keep these people safe, while Tang also tries to make arrangements to keep his family safe, and eventually leave.  Then the Japanese make headway into the zone, and infamously “recruit” (read enslave) women for their “comfort stations”….

Then there is the tale of Japanese soldier Kadokawa.  He is (as is often the case) a young, impressionable, inexperienced man thrown into the war on the other side, and caught up wholeheartedly in the Japanese nationalist doctrine.  He’s forced to contend with trying to survive and deal with what he’s seen, and done, and his story is almost as compelling as the Tang family’s.  I wouldn’t call it sympathetic by any means, but it serves as a valuable counterpoint.

Let me get back to my original statement.  Yes, I feel that this movie is everything that Schindler’s List should have been.  Quite frankly it makes Schindler’s List look like a bad TV movie.  I’ve never been a big fan of “List,”  I thought it was forced and pretentious.  I make this comparison for two reasons.  One, the black and white presentation absolutely screams for it.  And two, both films exist to expose and decry the atrocities committed by the other side.   In both these arenas, “City” far surpasses “List”, without becoming overly “preachy” or attempting to shove the message down your throat.

Honestly, I can’t recall the last time I was affected by a movie like I was in this case.  It was absolutely painful, tear and squirm-inducing, and difficult to watch overall, but at the same time, it was a beautiful, beautiful film, with some sincere moments of joy to be found.

Just so there are no surprises, the film is shot (quite stunningly) in black and white, and is entirely in Mandarin and Japanese, with a few bits of English and German as it pertains to the embassy staff.

I don’t turn out many 9/10 ratings.  I’m even going so far as to give City of Life and Death a 9.5.  Yeah, it is that good of a movie, despite being incredibly painful and difficult to watch.  It even made a hardened war-movie-veteran like me choke up on several occasions, and that doesn’t happen too often.  If this review seems a bit wandering, jumbled, and disconnected, its because I found it difficult to put down in words the experience.