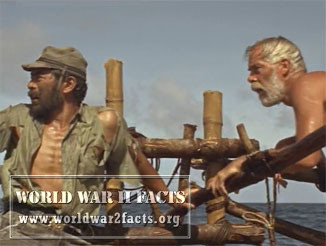 I would have liked to have been a fly on the wall when they pitched this movie.  “What? A cast of *two*? With very little dialog? And only one of them speaks English and we won’t subtitle the other? What?!”

I’m really shocked this film made it out the door at all.  But I’m oh-so glad it did.  1968’s Hell In The Pacific is a brilliant masterpiece of drama, and a statement about war that cuts right to the core of it all, the pure duality of human nature.

The film stars the venerable Lee Marvin and Toshiro Mifune.  And that’s it.  Marvin’s character (who is never outright named) becomes marooned on a remote Pacific island, which just happens to be occupied by an equally marooned Japanese soldier.

Marvin torments his foe, until he finally winds up captured.  He’s taunted and belittled until he manages to escape, and turns the table on Mifune.   He soon grows tired of the charade and lets him free.

They eventually team up together and build a raft, and escape their tiny island, to wind up on another one.  This one is an equally deserted bombed out Japanese village, that has obviously been overrun by American forces.

The ending is, well, somewhat in following with late 60’s apocalyptic fashion, but serves its point.  Just before the finale, the two appear to become mortal enemies again, after Mifune gets a glimpse of captured and killed Japanese soldiers in an issue of LIFE Magazine.

The chemistry between Marvin and Mifune is 80% of what makes this film so wonderful.  I doubt it could have been done with two other actors.  Mifune’s presence and Marvin’s bravado just complement each other in an amazing fashion.

Equally amazing is the combination of the cinematography, and Lalo Schifrin’s soundtrack (who also did the soundtrack to ’71s THX 1138).  If you listen closely and carefully you can follow the soundtrack as it goes from a wild chaos of strange and spooky sounds as the two stranded soldiers fight each other, to a more carefully arranged baroque church organ, to a typically upbeat and hopeful classical piece as they help each other off the island.  One scene in particular stands out as an example of this combination, where Mifune is sitting underneath a strange yet beautiful carved out rock at the water’s edge, and the baroque organ piece plays loudly….

Is it a particularly exciting bit of film?  Eh, not really.  But its definitely a masterpiece of its own making.