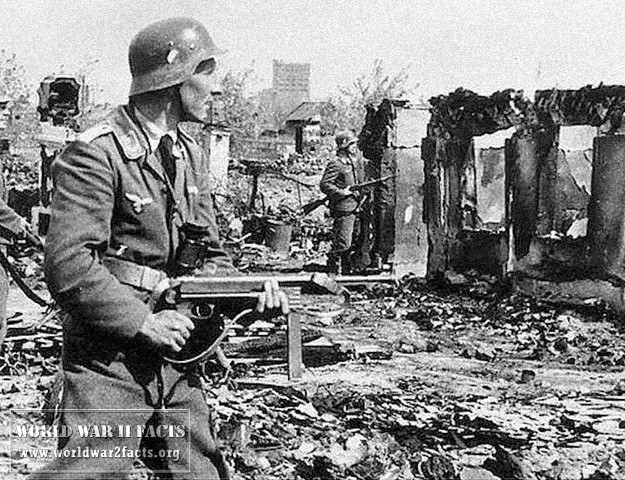 Operation Barbarossa was based on a massive attack based on blitzkrieg. Hitler had said of such an attack that.

In December of 1940, Adolf Hitler issued Operation Barbarossa, a plan that was under development since July 1940. The core of the pan was an attack on the USSR. The plan was originally called Operation Fritz but Hitler decided that Barbarossa was a more fitting name, in honor of the Holy Roman Emperor Frederick Barbarossa.

In the first part of Operation Barbarossa, it was outlined that the German army would attack the Soviet forces as close to the USSR’s border as possible. Hitler already successfully used this strategy against other opponents in WW II, the strategy was named Blitzkrieg (Lightning war). The main idea behind the strategy is to attack the enemy, in this case the Red Army as fast as possible and not allow them to withdraw and regroup to form a defensive position. The second phase of the operation was to create a frontline from the river Volga to Archangel. To maximize the effectiveness of their attacks the German forces were divided into three strike forces. The first strike force was to attack in the direction of Leningrad, the second in the direction of Kiev and the third would act as the center force and attack in the direction of Moscow which was also it’s final target.

Drawbacks to Invading the USSR

Most of Hitler’s staff didn’t really have the nerve to question his judgment, and at this time there weren’t many of his staff that even had reason to. The army and air force were very enthusiastic about Hitler’s plans to attack the USSR. One member of his staff however, Admiral Erich Raeder, the commander of the Navy, warned Hitler that it wasn’t wise to attack the Soviet Union when they still haven’t finished their fight with Britain. Raeder suggested alternatives but Hitler was bent on conquering Russia and taking its resources for Nazi Germany. Some historians have speculated that another reason for Hitler’s obsession with Russia was Napoleon, or rather his failure to take Russia. The theory is that Hitler wanted to prove to himself and the world that he was a greater military strategist than Napoleon, and that he could take Russia for himself. The advocates of this theory usually explain it by pointing out that Russia wasn’t a real threat at the time for Hitler, on the contrary they were allies of sorts. Even while Hitler was planning how to destroy the USSR they were making agreements with Germany on economic concessions and the Soviets even requested from Hitler to allow them to join the Tripartite Pact.

In Hitler’s original plan the invasion of Russia was set to begin on May 15. However because of logistical problems and because they had to provide support to Italian forces in the Mediterranean and Africa those plans had to be postponed. When the attack finally started, despite the population’s surprise, Stalin knew that the attack was coming. Stalin found out about the attack from a variety of sources but the definitive source was probably Richard Sorge. Sorge was his spy in Japan where he had access to the messages of the German

Even Great Britain and the U.S.A had some information about the attack. Surprisingly enough Stalin didn’t believe any of it. He couldn’t and didn’t want to believe that Hitler would attack the Soviet Union. He couldn’t find a reason why Hitler would attack him. He even continued to send strategic resources to Germany, as agreed in their treaty, until the very moment that German troops crossed the Russian border.

Strategic Bombing of the USSR

On June 22, 1941, the German air force started a strategic bombing of Soviet air and naval bases. They succeeded in destroying around one-fourth of the Soviet air force. The Germans sent their triple task forces into Russia and before the Red Army even had time to respond the German offensive had a thousand-mile front. Within a week, Germany’s allies declared war on the Soviet Union, which was now fighting against Germany, Italy, Romania, Finland, Hungary and Albania.

At the time nobody could have known it but Hitler’s decision to attack the Soviet Union and the enormous battle that would be fought for the next four years would have a monumental impact on the rest of the war and Germany’s ultimate defeat at the hands of the Allies.