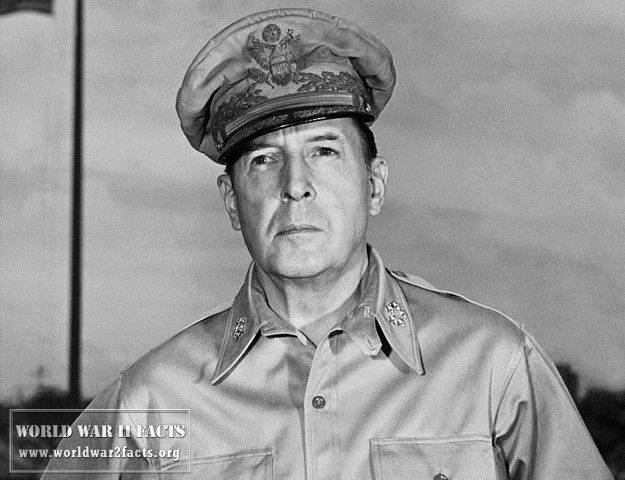 Douglas MacArthur was born in Little Rock, Arkansas on January 26, 1880. He went to West Point Military Academy where he was commissioned as an engineer in 1905. He was sent to Tokyo, Japan where his father was monitoring the Japanese operations against Russia. The young MacArthur would quickly grow up and see active duty service in both World Wars and finish his career as a general officer during the Korean War.

MacArthur in World War One

When the United States entered WWI Douglas MacArthurwas sent to France. In the second battle of Marne he

distinguished himself and once the war ended in 1918, Douglas MacArthur came out of it as the youngest divisional commander in the field. When the war ended he returned to the U.S. and was promoted to brigadier general. He would also become the youngest superintendent of West Point in the 117 year long history of the military academy.

Douglas MacArthur at the Start of World War 2

After the Japanese attack on Pearl Harbor during World War II Douglas MacArthur was given orders to defend the Philippines from the Japanese. At the start of the Pacific War, much like most other western commanders he failed in his mission. The American forces had to withdraw from the Philippines and it was a huge blow to the morale of the American military but MacArthur was determined to return and win back the islands. This is also when his famous “I shall return” quote was coined. In 1943, the U.S. was prepared to put up a fight with the Japanese. MacArthur was now planning his strategy for taking the Philippines back. Instead of attacking all of the islands in that area at once he decided to use a strategy known as “island-hopping”. The idea behind this tactic was to first capture the larger and more important islands that were captured by the Japanese. Despite the new strategy U.S. casualties were still very high and any plans made for attacking the Japanese home islands were filled with dangers. U.S. intelligence made an estimate that in the case of a direct attack on the Japanese home islands more than 1 million American soldiers would either be killed or wounded. This was probably one of the main reasons why U.S. President Truman ordered the atomic bombings of Hiroshima and Nagasaki.

Douglas MacArthur was not only a capable military strategist he was also familiar with and had detailed knowledge of Japanese culture. Because he was the Supreme Commander of the Allied Forces in the Pacific he also served as the commander of the occupation forces that were present in Japanese from August 1945, when Japan formally surrendered, until 1951. One of his first actions was to have the emperor of Japan, Hirohito, announce publicly that he wasn’t a god but just a man of flesh and blood. Using his influence he also made sure that the emperor wasn’t put on trial for war crimes. MacArthur feared that it could lead to a bad situation because a lot of people were loyal to the emperor and might consider this a big insult. In the end only members of the government and military faced public trials.

MacArthur made big efforts to help rebuild the nation. Japan got a new democratic constitution and MacArthur himself led internal reforms which helped move Japan forward as a country. Interestingly enough, a lot of politicians back home in the U.S. weren’t great supporters of what MacArthur was doing, he had more opponents in Washington DC than in Japan. They didn’t like what he was doing because it gave him a position of power.

General MacArthur During the Korean War

After Douglas MacArthur finished his involvement with WWII affairs he was in charge of the UN forces that stood up to North Korea during the Korean War. Once again he showed his military skills when he managed the landing at Inchon, a very risky operation which many considered illogical. After the UN forces led by MacArthur pushed further into Korea the government of Communist China declared that if the UN forces cross the 38th Parallel they would intervene. U.S. President Harry Truman gave MacArthur orders to take his forces to the Yalu River. Truman however didn’t give MacArthur permission to blow up the bridges on the Yalu River, like he wanted to. If the bridges were destroyed the Chinese would have had a very difficult time crossing the river in big numbers.

The bridges weren’t destroyed and the Chinese send in their troops and huge amounts of supplies. MacArthur

protested about the failure to give him permission to blow up the bridges and was relieved of command. He was replaced by General Matthew Ridgeway.

When Douglas MacArthur returned to the U.S. he was hailed as a hero. He led a campaign against Truman’s administration, when president Eisenhower was elected as president he consulted with MacArthur about the Korean War. MacArthur advised him to use atomic bombs on the enemy military in North Korea and attack China. His advice was rejected and MacArthur had no role in Eisenhower’s new administration.

After he retired from the U.S. Army he took a job as chairman on Remington Rand Corporation’s board. Douglas MacArthur died on April 5, 1964 in Water Reed Hospital in Washington.