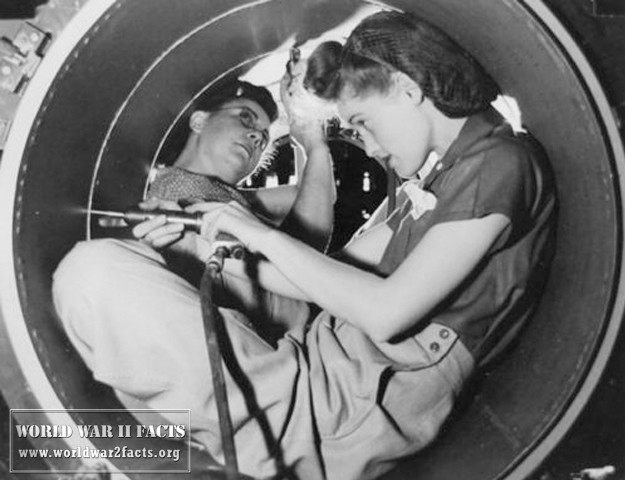 Although popular opinion holds that the United States economy significantly benefitted from World War 2, there were a number of negative effects on the economy that occurred during and after the war. The United States was engaged in the war from between 1941 (after the bombing of Pearl Harbor) through 1945 (after the surrender of the Japanese). During the war, almost all nations on the planet were affected in one way or another in both positive and negative ways. For American society, the war caused major changes in almost all aspects of life to include political, social, and economic conditions.

Despite progressive Democrats having a controlling interest in the United States government during WW2, most social and economic reforms were suspended in order to dramatically increase defense spending. At the same time, almost all anti-trust legislation was practically ignored to help further the war efforts by the United States. Most factories would go on to make the standard work day longer to help boost production. This was despite existing labor laws that were supposed to prevent this from happening. Also, due to the draft, most of the nation experienced severe labor shortages due to men being called forward to sever in the armed forces. As a result, many child labor laws started to be ignored or relaxed, and large number of women also entered the work force. During World War II, the number of teens that entered the American workforce increased from just one million to three million in total. Of these numbers, approximately one third were high school drop-outs.

Another negative impact on the United States economy during WW2 was the reduction in funding to a number of the New Deal agencies. These

included the Works Progress Administration (WPA), the Civilian Conservation Corps (CCC), and the National Youth Administration (NYA). All of these organizations had been put into place to help fight discrimination in the job market and to help disadvantaged groups throughout the country.

Another significant impact on the U.S. economy during WW2 was the significant increase in the amount of United States Federal debt. During the war, the country’s overall spending deficit would increase from $9 billion USD to more than $98.5 billion USD.

Although the number of jobs increased during World War 2, wages were kept artificially low in this same timeframe. As a result, 25 percent of all American workers made 64 cents or less an hour. The low wage levels also resulted in more than 20 million Americans being required to barely be able to afford basic subsistence during the war. Combined with the simultaneous reduction in New Deal programs by the government, the ability for the poor to obtain assistance was dramatically decreased.

Rise of the American Corporation

Throughout World War 2, the United States government spent a large amount of money on government contracts to further the war efforts. More than 65 percent of these contracts would be awarded to the 100 largest corporations in the country. As a result, competing small businesses found themselves not able to make enough money to remain open. The slacking of anti-trust legislation enforcement would further compound the problem and allowed large businesses to thrive.

Starting in 1940, the United States adopted the federal personal income tax. This year was the first that the tax was applied to all Americans in the workforce. It would also see the beginning of deducting taxes from payroll checks in order to help support government spending on the efforts in WW2.