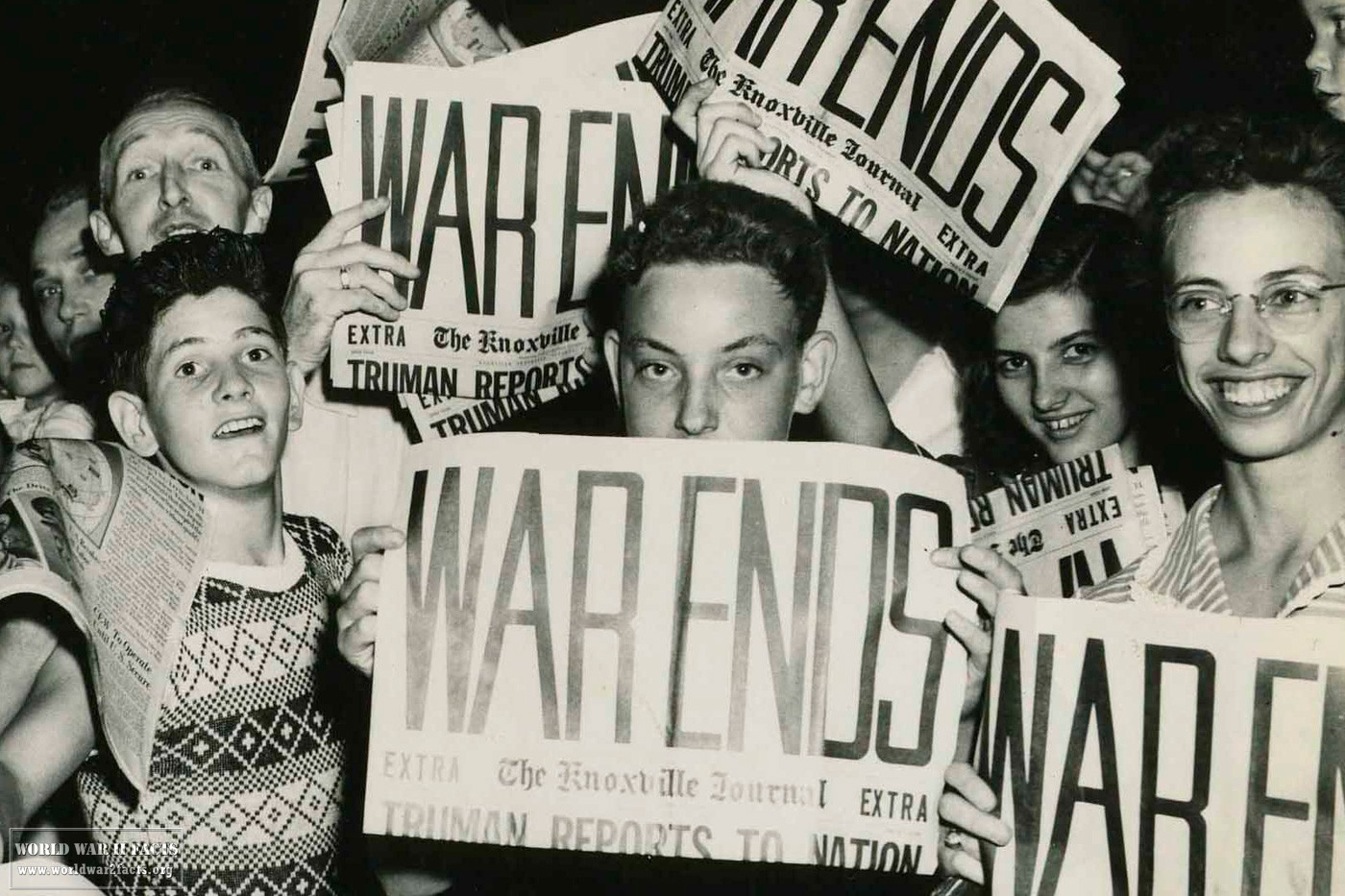 V-J day, or Victory over Japan Day is the name selected for the date that the Empire of Japan surrendered to the Allied Powers effectively ending World War 2. The date is celebrated in the United States on the anniversary of the signing of the Japanese surrender document occurred on September 2nd, 1945. V-J Day is also used to refer to the date that the announcement of the surrender was made on the afternoon of August 15th, 1945 and due to time zone difference on August 14th, 1945. The United Kingdom celebrates VJ day on the date the surrender of Japanese forces was announced, August 15th. V-J day was selected for the name of the celebration, or date, after naming V-E day for victory in Europe earlier that year on May 8th, 1945.

When Did the Japanese Formally Surrender in WW2?

The Japanese formally surrendered to the Allied Powers on September 2nd, 1945 during a formal surrender ceremony in

Tokyo Bay, Japan onboard the USS Missouri. The Japanese formally recognize August 15 as, 終戦記念日 Shūsen-kinenbi, or the “Memorial Day for the End of the War.” The official name of the date in Japan is, 戦歿者を追悼し平和を祈念する日 Senbotsusha wo tsuitōshi heiwa wo kinensuru hi?, or “The Day for Mourning of War Dead and Praying for Peace.” This name was adopted in 1982 by a law, or ordinance passed by the Japanese government. South Korea formally celebrates August 15th under the title, Liberation Day.

The following is the timeline leading up to V-J Day during World War 2. The timeline is a subset of the overall WW2 Timeline.

1 April – 21 June 1945 – Battle of Okinawa. Resulted in more than 1/4th of the Okinawa civilian population dying. Many were due to mass suicides coordinated by the Imperial army. The United States military suffered more than 85,000 casualties during the battle and there were more than 140,000 Japanese casualties.

26 July 1945 – The Postdam Declaration is issued. U.S. President Harry Truman tells the Japanese people to either “Surrender or suffer prompt and utter destruction.”

6 August 1945 – The “Little Boy” atomic bomb is dropped on the Japanese town of Hiroshima destroying the city.

15 August 1945 – Japan formally surrenders. Many papers throughout the world declare the date to be “V-P Day” (Victory in the Pacific) or “V-J Day.”

2 September 1945 – President Truman declares this date to be the official “V-J Day.”

1 November 1945 – The planned Allied invasion of Kyushu under Operation Olympic (did not occur).

When is VJ Day in China?

Once the official Japanese surrender was accepted onboard the USS Missouri on September 2nd, 1945, the Nationalist Government of the Republic of China announced three-day Holidays to celebrate V-J Day that commenced on September 3rd, 1945. Beginning in 1946, September 3rd was celebrated as, Chinese: 抗日戰爭勝利紀念日; pinyin: Kàngrì Zhànzhēng Shènglì Jìniànrì, or “Victory of War of Resistance against Japan Day.” This date would later evolve to be recognized as: Chinese: 軍人節, or “Armed Forces Day” in 1955. September 3rd remains recognized as “V-J” Day in mainland China today, and there are a number of “September 3” streets and schools in most major cities in the country today.

When is World Peace Day?

In the 1960’s, there was a movement to make September 2nd an international Holiday that would be called “World Peace Day.” Once the Holiday started being celebrated in 1981; however, it was moved to September 21st to coincide with the opening date of the General Assembly of the UN every year.

Is the Celebration of V-J Day Racist?

There are some who believe that the celebration of V-J day promotes racism, and instead support the V-P Day label (Victory in the Pacific) as the Australians celebrate. This comes from the V-J descriptor emphasizes the victory over the Japanese people vice the end of war in the Pacific Theater as connoted by the V-P label. The debate most commonly arises in the U.S. state of Rhode Island, which is the last U.S. state to formally recognize V-J Day as a Holiday. At the time of this writing, the official title of the celebration of the end of World War 2 remains V-J Day.