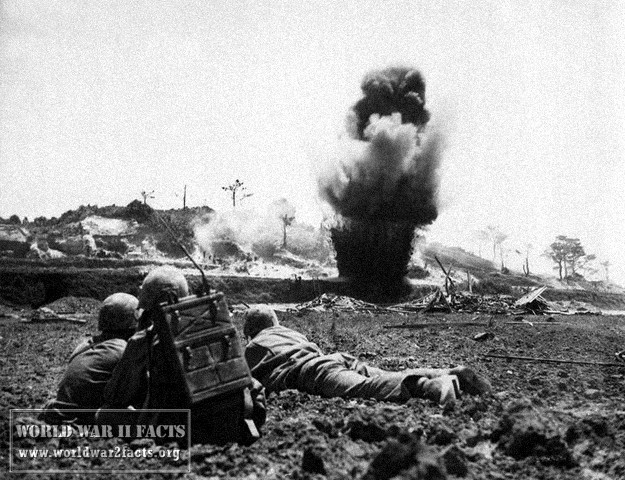 During World War II there were two main battlefields, the first was of course in Europe against Italy, Nazi Germany and it’s allies and the other was mainly between the U.S. and Japan. One of the more important battles between Japan and the U.S. was the Battle of Okinawa. The battle started on April 1, 1945 and was important for the U.S. plan of ending the war in the Far East. The battle would go down in history as one of the bloodiest, most brutal but also important battles in the Second World War and lasted effectively through June 22nd, 1945. This would be the last major battle of World War 2.

At that point the U.S. had two main objectives as far as the Far East was concerned: eliminate the rest of Japan’s merchant fleet and a direct attack on the Japanese industrial complex. Okinawa is an island on the southern end of Japan, it is around 60 miles (96 kilometers) long and 2 (3 kilometers) to 18 miles (29 kilometers) wide. It’s strategic importance for both sides was very important. The island had 4 airfields that the U.S. desperately wanted to control. A problem for the U.S. forces however was that they couldn’t get a lot of intelligence about Okinawa.

Battle of Okinawa Casualties and Losses

United States military intelligence estimated that there were some 65,000 Japanese on Okinawa. They also estimated that most of them would be on the south part of the island. In reality there were 130,000 Japanese on Okinawa as well as some 450,000 civilians. The forces on the island were under the command of Lieutenant-General Mitsuru Ushijima, he had orders to hold the island at any cost.

General Ushijima’s strategy was to keep his forces in secure fortifications located in the south of the island. If the U.S forces wanted to take Okinawa they would have to engage in frontal assaults. On top of that the Japanese also wanted to use kamikazes against the U.S. forces, they believed that the kamikaze attacks would deal so much damage to the U.S. forces that they would give up Okinawa and retreat.

Lieutenant-General Simon Bolivar Buckner was the commander of the American land forces. He had some 180,000 men for the Battle of Okinawa. The U.S. forces selected Hagushi Bay for their landing on Okinawa, as they had done in Iwo Jima, before the landings a series of intense bombings were performed. Another problem for the U.S. forces was that they were vulnerable to attacks from Taiwan and mainland Japan.

The U.S. command selected 1 April, 1945 as the date of the attack. In the days before the attack the U.S. forces had already landed some units on Okinawa but it wasn’t in Hagushi Bay, it was some 20 miles (32 kilometers) to the southwest of Hagushi Bay.

As the Japanese planned they used Kamikaze attacks against the U.S. Navy that was anchored near Okinawa. The results however weren’t as great as the Japanese high command expected. A total of 193 kamikaze planes were launched, out of those 169 were destroyed. The remaining planes that did get through caused a lot of damage though. Despite that the problem for the Japanese was that they lost a lot of planes in the process so even though the planes that got through caused a great deal of damage the Japanese lost a lot of planes as well.
As for the invasion itself, the U.S. sent 300 warships as well as over 1,000 other ships to the Battle of Okinawa. The Marines landed on the island on 1 April. They didn’t encounter much resistance and by the end of the day 60,000 troops landed in Hagushi Bay. In 20 days almost all of the Japanese resistance in the north was eliminated.
The real Battle of Okinawa was the battle that happened in the south. On 4 April the U.S. XIV Crops got to the Machinato line. There the U.S. advance came to a halt. They breached the Machinato line on 24 April, once they branched Machinato they were once again halted at the Shuri Line. The offensives at Shuri and Machinato combined with the efforts of the kamikaze attacks, which sunk 21 U.S. warships and damaged another 66, led to heavy U.S. losses.
On 3 May, Ushijima ordered a counter-attack but with no success. By 21 May, he had to retreat from the Shuri Line, that didn’t mean that the Japanese defense weakened, however. By June it became clear that the Japanese had already lost Okinawa. On 2 July the Americans declared Okinawa as secure. A post-battle examination of many of the Japanese war-dead found that many of the soldiers had held grenades against their stomachs and died rather than face the humiliation of being taken prisoner by the United States forces. General Ushijima was found to have committed hara-kiri (ritual suicide) on June 16th after being convinced that he had fulfilled his duty to the Emperor.

The Battle of Okinawa saw heavy casualties on both sides and was a victory for the U.S. forces. Of the U.S. land forces over 7,000 were killed and over 32,000 were wounded. On the sea the U.S. had over 5,000 dead and over 4,500 wounded. The Japanese death toll was over 100,000 and over 7,000 were taken as prisoners. The U.S. Navy lost 36 ships with over 360 damaged. The Air Force lost 763 planes. The Japanese lost 16 ships and over 4,000 aircraft. The formal document which signified the ending of the battle was signe don September 7th, 1945 on what is now present-day, Kadena Air Force Base. Well prior to this point; however, Allied engineers were hard at work making improvements to the island to support a future invasion of the Japanese home islands.