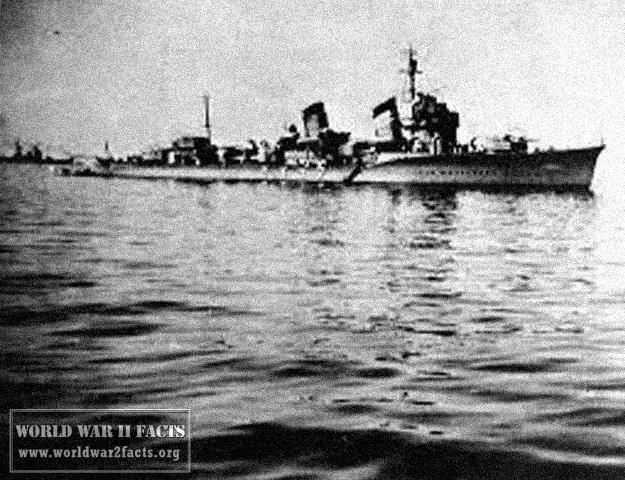 On November 1st, 1943, the United States was able to land forces on Bougainville. The presence of the Americans posed a threat to the Japanese forces located on Buka Island to the north. As a result, approximately 900 Imperial Army soldiers were placed on destroyer transport ships: Uzuki, Yugiri, and Amagiri. These ships were subsequently sent to reinforce the Japanese base and were escorted by Imperial Navy destroyers Makinami and Onami who were under the command of Captain Kiyoto Kagawa.

Once the United States Navy gained intelligence on the presence and mission of the Japanese convoy, they sent five Fletcher class destroyers (Spence, Converse, Dyson, Claxton, and the Charles Ausburne) under the command of then Captain Arleigh Burke to intercept the Japanese convoy.

* Denotes the ship was sunk during the battle

The American forces were not able to intercept the Japanese destroyer transports before they were able to land the more than 900 soldiers and supplies at Buka Island. The ships then embarked an equivalent number of Navy sailors (the Army forces took their place), and started their return to Rabaul. At approximately 0140, the Japanese ships were seen on radar by the U.S. destroyers.
Due to having superior radar to the Japanese destroyers, the American ships were able to close and launch torpedoes at approximately 0155 prior to being sighted by the Japanese forces. The Makinami was hit by one torpedo from the barrage and was disabled and subsequently sunk by gunfire from the American destroyers. The Onami was struck by a number of American torpedoes and sank. The remaining Japanese transport destroyers fled. Captain Burke pursued the Yuguri and sank the ship at approximately 0300. The Uzuki was also hit by enemy fire, but was able to escape the area suffering severe damage.

Although not known at the time, the Battle of Cape St. George would mark the end of the Japanese resistance in the Solomon Islands and the end of the Tokyo Express. The battle would also be an example of the successes of the Allies to gain and maintain superiority in night maritime combat thanks to the advances in radar technology. After the battle, there would not be another surface engagement in the Pacific Theater of War until the Battle of Saipan in June of 1944.