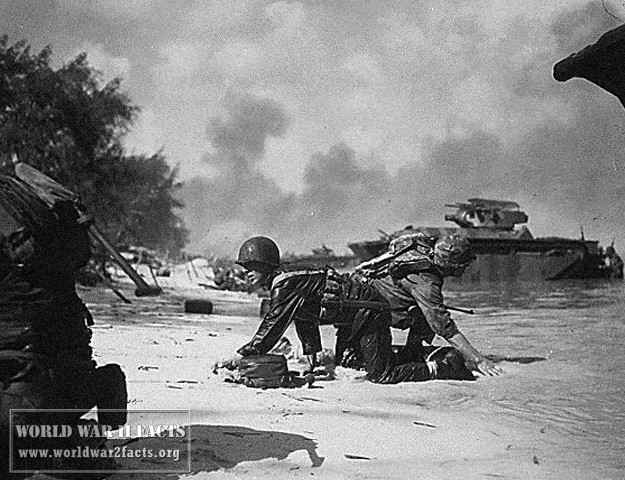 In the campaigns of 1943 and 1944 the Allies captured a number of islands which included the Marshall Islands, the Solomon Islands and a part of New Guinea. What remained was ruled by Japan and one of the islands among them were the Caroline Islands.  The battle of Saipan wasn’t originally a part of the Allies war effort but they soon realized that Saipan would serve as a good location not only to break Japan from it’s Central Pacific garrisons but also because it would be a suitable location for aircraft launches in an eventual attack on the Japanese home islands. The battle of Saipan began on the 13th of June 1944 and landings began two days later with more than 300 LVTs and 8, 000 marines going onto the shores first with 11 ships providing fire support.

Saipan is an island about 1300 miles (2092 km) on the south side of Japan. It is a small island 5 miles (8 km) wide and 18 miles (29 km) long but it had a huge strategic importance for the United States during the Second World War. The importance of this small island was in it’s location, it lies between Japan and it’s Central Pacific garrisons but it was also important for Japan because it was a good location for staging their air attacks. Another advantage it would provide to the Americans is that they could launch an attack on Tokyo and the Japanese home islands from there.

The attack on Saipan surprised the Japanese because they expected an attack further south. The Japanese seeing an easy opportunity

to attack the U.S. forces organized a quick attack but the resulting battle was devastating for the Japanese Navy which suffered loses of 3 aircraft carriers and hundreds of planes.

Without getting supplies the battle of Saipan would be a hopeless effort for the Japanese, nonetheless the Japanese were determined to fight to the last man. The Japanese used many of the caves and the mountainous terrain to their advantage but it wasn’t long before the Americans developed an effective counter attack, they used flamethrowers, artillery and machine guns to clear out the caves.

Eventually the Japanese simply didn’t have anywhere to go so orders were given to perform a banzai charge. The Japanese army even convinced the civilian population that it’s better to die than to be captured. At dawn of the 7th of July about 3000 men charged on the American forces, from that attack 650 American soldiers were either killed or wounded.

After the banzai charge the American forces finally secured Saipan and the battle of Saipan was officially over on the 9th of July. The battle of Saipan came at a high price, over 30,000 Japanese died in the battle, for the Americans it was the most costly battle in the Pacific war  to that date. Just under 3, 000 Americans were killed and more than 10, 000 were wounded.

The battle of Saipan is also tragic for it’s huge civilian losses. Saipan was captured by Japan after the first world war and because of that a large number of Japanese lived on the island, more than 25, 000. The Japanese emperor was worried about a possible defection to the U.S. by the civilians on Saipan so he encouraged the population to rather commit suicide than to allow being captured. In the last days of the battle over 1, 000 civilians committed suicide and over 22, 000 Japanese civilians died in total during the battle of Saipan.

After the battle of Saipan ended the island itself would play another pivotal role in ending WWII. Saipan had a strategic importance because it was relatively close to the home islands of Japan. The next year it would be the place of operations for the planes that would eventually carry and drop the nuclear bombs on Hiroshima and Nagasaki forcing Japan to an unconditional surrender ending the Second World War.