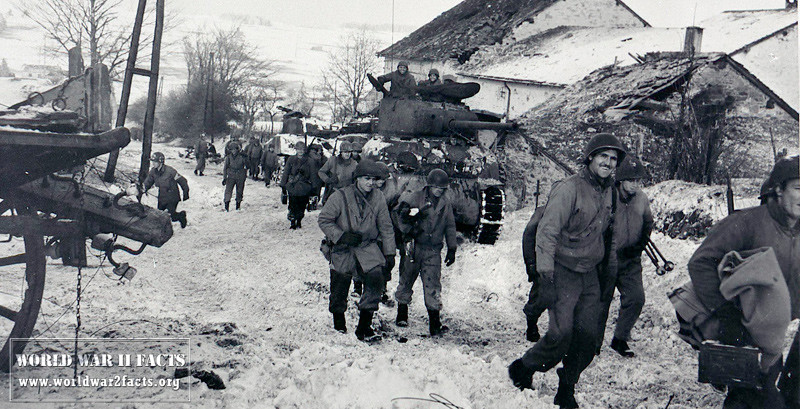 The Battle of Bastogne was a battle between American and German forces at the town of Bastogne in Belgium from 20th to the 27th December 1944, it was part of a bigger operation, the Battle of the Bulge. The battle is also known as the Siege of Bastogne. The German forces tried to reach Antwerp harbor, their plan was to reach it before the Allies and bring in more forces to hold it and to defeat the nearing Allied forces. All of the roads in the Ardennes mountains met at the town of Bastogne, that was one of the main reasons why it was so appealing and important for the Germans. The siege ended on 27 December 1944 when the American forces holding the town were relived George Patton’s 3rd Army.

Battle of Bastogne Facts and Summary

After the Invasion of Normandy and the push to France afterwards, the Allies extended their lines from Nijmegen to the neutral Swiss. The city of Antwerp was notable for its port and was captured during the push, by winter the Allies controlled the German territory near Aachen. Hitler developed a plan to attack Allied troops near Belgium. The plan was for 55 divisions to perform a surprise attack to cross the Meuse River and capture Antwerp. Despite protests from some of his commanders the plan was set to launch on 16 December 1944. The Allied commanders on the other hand didn’t’ consider that the Germans would launch an attack from the Ardennes because of the terrain which wasn’t really suitable for a large-scale attack. In the weeks leading up to the Battle of Bastogne the Allied command

expected an attack from anywhere but the Ardennes. Bastogne, a strategically important city in the region was protected by the 28th Infantry Division which was assigned to this relatively peaceful area after it was constantly fighting in its previous assignment. Because of the layout of the terrain in the area the Allied command believed that there couldn’t be a big scale attack in this area.

The responsibility of capturing Bastogne was in the hands of Heinrich Freiherr von Luttwitz. His plan was to attack a 7 mile (11 km) line using three divisions, the Allied forces were mostly in small groups located at big villages with outposts at the river. Because the forces weren’t wide enough to sustain an even battle line their attention was on the four roads. Due to heavy rainfall before the German attack, only one road could be used as a crossing point.

At this point the Allies realized that they really couldn’t afford to lose Bastogne, they already lost some lines during previous battles and if they were to lose Bastogne the Germans could keep on advancing. Having this in mind Eisenhower sent some of the best American troops to the town, he knew that if the Allies were to hold Bastogne they would have to give their best. For the task of holding Bastogne the Americans sent in the 101st Airborne Division with soldiers from the Easy Company.

Both sides had strengths and weaknesses that would present themselves in the Siege of Bastogne. The Germans had vastly more troops, over 100,000 of them prepared to take Bastogne that is now considered as part of the greater Battle of the Bulge. At first glance their victory seemed almost certain but the truth was that even though they ruled in numbers most of their soldiers weren’t very well trained and inexperienced, they were mostly young recruits sent into battle to sustain the German war machine.

The American troops in Bastogne desperately needed reinforcements, Patton’s had his army on the south side of Bastogne and he was ordered to move north. With reinforcements the Allies could hold Bastogne but getting them there took time.

During the battle, the 101st Commander, General Anthony Clement McAulifee received the following demand for surrender from the German commander fighting the 101st which has become one of the most famous World War II quotes known to this day:
To the U.S.A. Commander of the encircled town of Bastogne.
The fortune of war is changing. This time the U.S.A. forces in and near Bastogne have been encircled by strong German armored units. More German armored units have crossed the river Our near Ortheuville, have taken Marche and reached St. Hubert by passing through Hompre-Sibret-Tillet. Libramont is in German hands.
The German Commander.

When COL Harper, the Regimental commander was asked to explain the meaning of the reply by the German officer taking the message

back to the German HQ, he replied that it was the equivalent of “Go to Hell.”

On 15 December the Germans started sending men and equipment over the river and grouping near the American garrisons. Just a few hours later German artillery began the bombardment of the Americans, this was the start of the Siege of Bastogne. Heinrich Freiherr von Lüttwitz, the German commander even sent a note to the American troops demanding that they surrender or be annihilated. The Americans were in an unfortunate position, not only did they need reinforcements but supplies as well, luckily for them the weather began to improve and the Allies were able to air-lift supplies to them.

Germans mistakes also helped the Americans when they moved some of their forces from Bastogne to Meuse, because of this the Americans were able to hold their position until Patton’s army arrived. When Patton’s Third Army arrived the German troops quickly started falling back and the Siege of Bastogne was over.