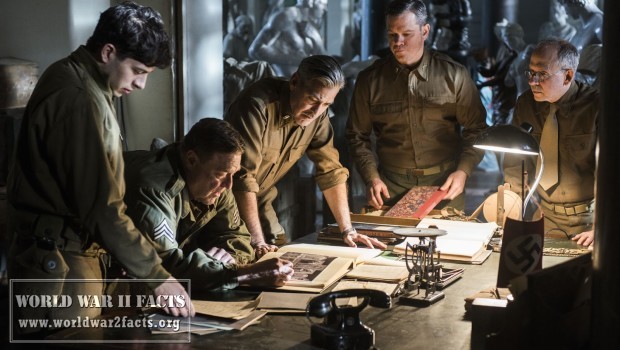 The Monuments Men (in case you were living in a cave for the last several months) is a fictionalized re-telling of the story of the “Monuments, Fine Arts, and Archives” division of the US Army in Europe during World War II.  Essentially it was these guys’ job to try and prevent the Nazis from pillaging and/or destroying priceless and irreplaceable works of art and culture, and also to prevent Allied forces from doing the same.  Not always successful, but probably more so if they had not existed.  The movie is based on the book of the same name by Robert Edsel.

After a brief foray into the somewhat comical escapades of putting these aged and out-of-place misfits through basic, they’re sent off into the thick of the war, split up in search of (for example) Michaelangelo’s Madonna of Bruges and the Ghent Alterpiece.    They’re pit against the Nazis, and the clock, as the war winds down and they must locate and recover literally thousands of works of art before Germany is defeated and the “Nero decree” is executed, destroying all of it.

Do they succeed? I’m not telling.

I know there’s been a lot of talk about the movie not being “up to snuff” or whatever, but dammit I liked this movie.  It had a certain feel about it that reminded me a lot of those classic 1950’s war movies.  Maybe it was the gratuitous lack of bloody violence and language, the subtle but always present comic relief, or the classic good-vs-evil nature of the whole story, even in this artistic-license-happy form.

Don’t think, though, that it was all 1950’s Frank Capra-esque, Director Clooney managed to throw in a few poignant moments, which I can’t spoil here, but suffice to say they are enough to provide an adequate counterpoints to the action and comedy.

Then there is the secondary story line of Claire Simone (Cate Blanchett), a French woman forced to work under a Nazi officer who was responsible for collecting and stealing numerous works of art.  In the extras on the disc, its discovered that this role was based in reality, which makes the almost out-of-place plot line make a lot more sense.

Actually there is a lot that makes so much more sense when you watch the extras.  Mostly the role of Epstein, which was based on another real-life person….

Flaws?  Well, I can’t help but get the feeling that there were a few scenes that wound up mostly on the cutting room floor.  Most notably the sniper scene with Goodman and Dujardin.  It just felt like there was more that should have been there. Unfortunately the Deleted Scenes section of the extras is really really small and underwhelming.   The soundtrack I felt borrowed way too much from the “Saving Private Ryan’s French Horn” school of music (but still wasn’t bad.)

I’m sure the movie was rife with technical inaccuracies, but since I’m not qualified to judge it on that, I will just say that it really shouldn’t matter.  Nothing I remember made me scream out “what are you doing, Clooney!?”

The Blu Ray presentation was flawless to my eyes and ears.  The film looks and sounds spectacular.  The film has a limited set of extras (see above) including a few “behind the scenes” shorts, bits about the real people behind the story, and an almost pointless couple of deleted scenes.  Again, though, you’ll find the “UltraViolet” digital copy garbage.  Just let me download the bleeding thing into iTunes without the extra hoops already!

If you’d like to know more about the real Monuments Men, I would suggest watching The Rape of Europa, a documentary about their cause and struggle…. and of course checking out Edsel’s book (which I have not!)

Would I recommend The Monuments Men?  Absolutely.  It may not fit the modern mold of an action-packed over-serious “tribute” war movie, but its a really decent film nonetheless.

[Disclosure: I was provided a review copy of this film on Blu Ray]