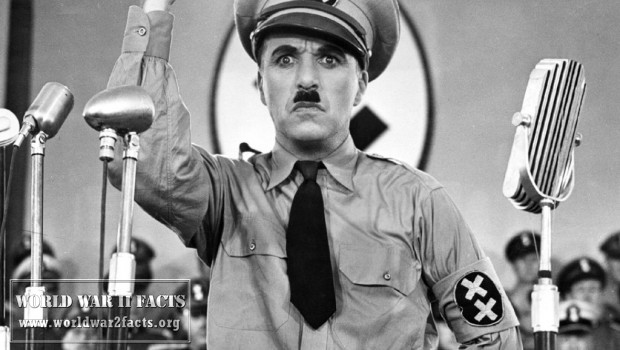 Man, all I can say about this one is this. Excellent stuff. This gem from 1940 pits master comedian Charlie Chaplin absolutely tearing apart the European dictatorships of the time. Before the US even got involved.
You’ll find yourself in a mix of laughing hysterically and just in jaw-dropping disbelief at some of the scathing parody here. Chaplin brilliantly pulls off the dual role of ‘Adenoid Hynkel’ and ‘The Jewish Barber’, and Jack Oakie’s ‘Benzino Napolini’ is equally magnificent.However, at times the gags can get a little tiresome and repetitive. Especially some of the faux-Deutsch ramblings. And the whole bit with the ‘balloon’ globe went on just a hair too long, and had a rather predictable ending… But for some reason you could almost imagine “that other guy” doing the same thing….

And the end of the film brings a downright somber ending to the rest of the laugh-fest. However I think this is 100% on purpose, and brings the entire film to a sharp point. Without it, I doubt it would have carried the same punch, and would have been dismissed as just another comedic journey. The monologue here is one of the best written and moving bits I’ve heard in a long time.

I highly recommend this film, if nothing else just to see Chaplin in a rare speaking role, and his ability to execute such a serious-yet-dead-funny picture.