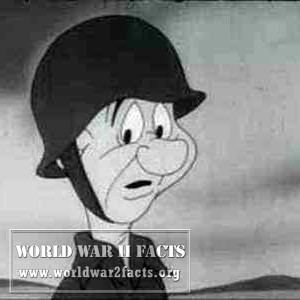 This’ll be the first look at Private SNAFU. Of course you all know what SNAFU means (and if you don’t I’ve heard that its German…)
Private SNAFU was a character in several US Army Training films from World War II. Created by Theodore Geisel (aka Dr. Seuss) and Phil Eastman, and brought to life by the Warner Bros. Cartoon Folks, then still headed by Leon Schlesinger at Termite Terrace. I’m not sure, but I believe word has it they were directed by Bob Clampett, and presumably animated by his “crew” at the Terrace.

“Booby Traps” tells the unwary soldier to watch out for, well, booby traps in the field. SNAFU comes across a Harem in the desert, loaded with lots of hot little 40’s numbers. Of course he’s more interested in the tobacco and piano at first, but finally catches on. They re-use the “wrong note on the piano” gag made famous in so many other Warner Brothers Cartoons, and ultimately a little mechanical Hitler reminds our bumbling hero of the correct note. Missing from this one is the stubbled cigar-smoking Technical Fairy, First Class.

I’ll be looking at the Private SNAFU toons, and probably several other of WB’s Wartime Looney Tunes at some point. I think they deserve some kind of attention and relation to their place in history.

Summary: “Booby Traps” tells the unwary soldier to watch out for, well, booby traps in the field.