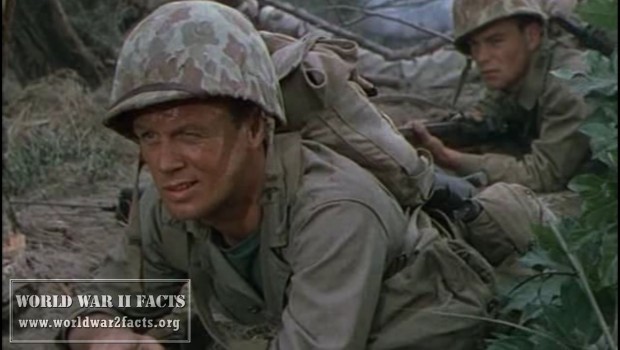 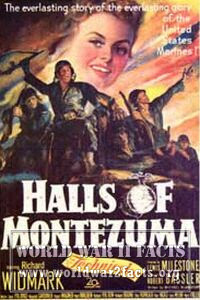 Wow.  Talk about a movie that was ahead of its time in its message.  Well, mostly anyway.  Halls of Montezuma follows the journey of a squad of US Marines as they storm an anonymous Japanese held island in the Pacific during WWII.  They are then tasked with locating a Japanese rocket emplacement before the next wave of troops arrive.

Their leader, Lieutenant Carl Anderson aka “Andy” (Richard Widmark) is a troubled man, having just lost most of a squad on Tarawa, and trying to make the best of his situation while combating recurring psychosomatic migraines.  The rest of his current squad (including a young “Walter” Jack Palance and an equally young Robert Wagner) come from diverse backgrounds, and carry weights of their own.

The film starts off as a flag waving, anthem blaring, do-or-die salute to the Marines, but quickly evolves into a more complex drama, detailing the insanity of war, and the toll it takes on the Marines.  We see a few of his squad overcome their problems, and a few who do not.  But overall the drama in this picture is some of the more intense I’ve seen, matter of fact I’d rate it right up behind “Private Ryan” in the quality of it all.

After they storm the beaches, they end up on a mission to locate a Japanese rocket base which is giving them nothing but grief.  On this mission they capture a  few prisoners, which further defines their struggle.

I won’t spoil the ending, but suffice it to say its not all flags and fireworks.  Anderson defeats his demons, and then they all end up more or less right back where they started.

But confusingly enough that includes more of the same flag-waving and anthem-blaring that started the picture.  That I just didn’t get.  After evolving this picture into the complicated story they did, to turn it around a complete one-eighty just ruined it for me!  Maybe that was on purpose, as part of the message, maybe it was just a ploy by the studios to not end the picture on such a down and somber note, I don’t know.

The acting on most everybody’s part is mostly brilliant, subtracting a few typically-50s overacted moments.  The cinematography shines, well, mostly as well.  And the action scenes get interspersed with stock footage of Iwo and other Marine actions.

I really enjoyed this picture, and I’m giving it a full 9/10.  Take away one for the 180-degree turn at the end and a few overplayed moments.  I highly recommend this one.