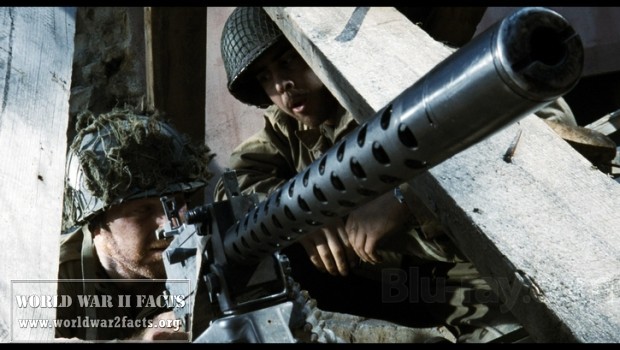 I’m going to leave the gist of things to my other review of Saving Private Ryan, based on the DVD, and stick to the Blu here.

In short.  Wow.  I can honestly say that this was like watching a new movie.  I saw and heard things that I hadn’t seen or heard since I saw it in the theater.  Yeah, its really that good.

The DTS-HD Master Audio, while still 5.1 (not a bad thing!), is truly wonderous, and this alone should get you out the door to pick this up.  The bass, the surround, the clarity of it all.  Actually there were a few things I don’t recall hearing in the numerous DVD viewings I’ve had.  Even bits of dialog that must’ve got muddied in the mix.

Let’s not forget the picture.  Especially in the D-Day landing scenes, there were details in the background, little scenes going on that I remembered seeing in the theater, but had somehow gotten lost in the DVD.  Coupled with the new HD Audio, this *still* remains the most intense and possibly accurate representation of what it must have been like.  That we’re ever going to get in our living rooms anyway.

But.  (You knew that was coming, right?)  I did experience some odd effects that I’m not sure how to explain.  Maybe it was just my kit.  During a lot of the more “still” scenes, there was a “flicker” or “noise” going on in the mid-brighter grays.  I’m not sure if it was due to how my set was handling the (intentional) coarse grain of the film or what, but it put a frown on my mug upon seeing it.  A few spots it was almost distracting.  You didn’t notice it when there was a lot of action, but boy.  Not sure what to make of this.

Speaking of the grain.  In 1080p its really noticable, and yeah I know that’s how it was intended, but after seeing it “fuzzed out” for so long on DVD it was very obvious.  Guess I’ll have to get used to how it was supposed to look!!

I did see quite a bit of what I thought was dust/specks pop up here and there.  Again, I don’t know if this was intentional, to at least in part mimic an “old” film, but its there.  You have to look for it in most places, but a few were like “hey! dust here!”  Not a biggie.

As for the extras, I think we’ve seen all these before on the two DVD versions.  I haven’t gone back through and watched them on BD yet.  And *thank you* for putting these on BD instead of DVD.  Means I will *definitely* get around to watching them again, its been a while.

Final word:  If you’ve got the kit to make this an experience, pull the trigger, upgrade to BD NOW!!  You will be impressed.