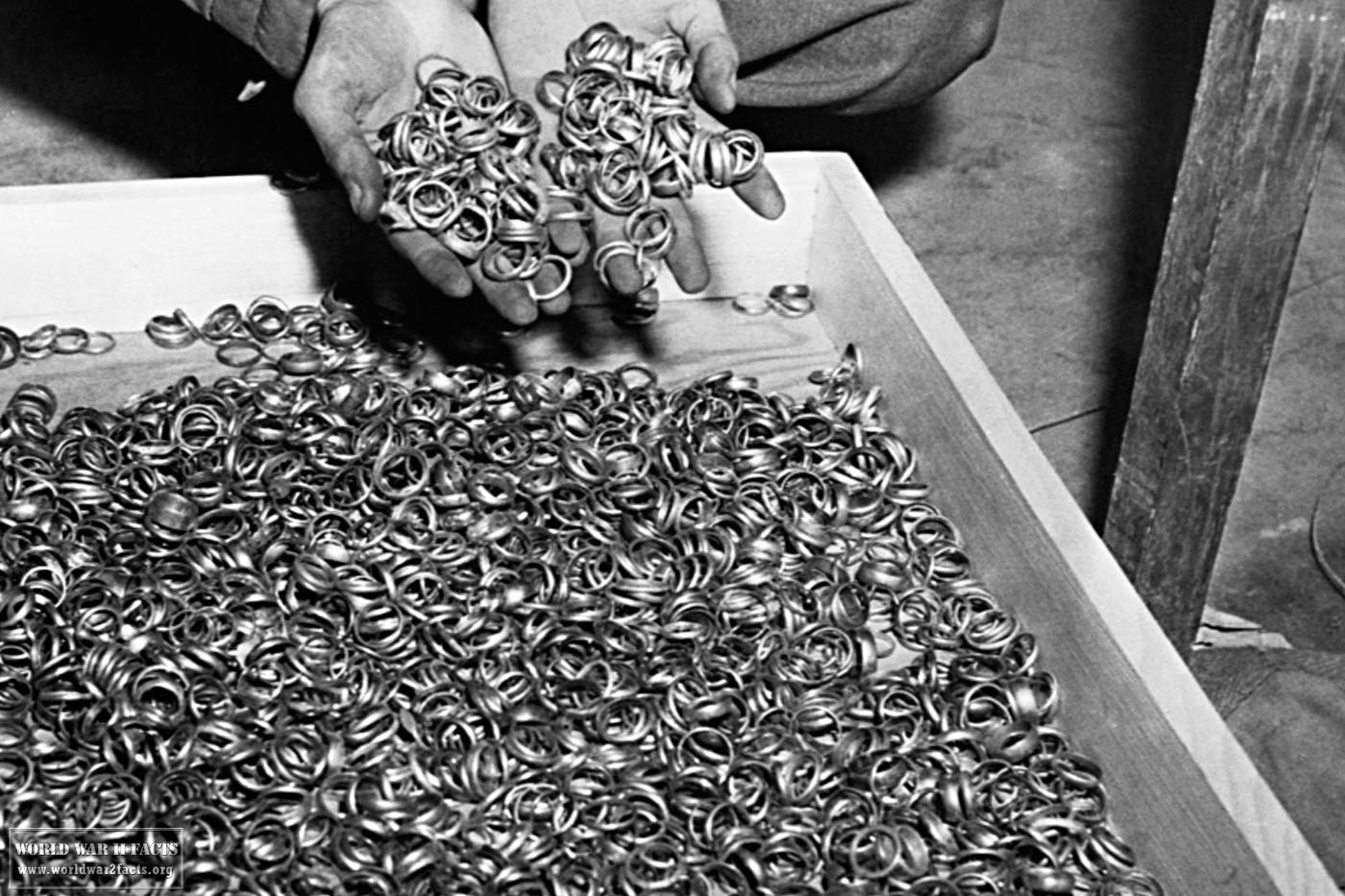 A few of the thousands of wedding rings the Nazis removed from their victims to salvage the gold. Buchenwald concentration camp. Germany, May 5, 1945.

There were more than 6 million Jews murdered during the Holocaust before and during World War 2. More than have of these peoples were killed in the gas chamber system of the Nazi Death Camps run between 1942 and 1945. The camps with the most deaths or that become most well-known to the public were the Auschwitz-Birkenau, Dachau, Chelmno, Sobibor, Treblinka, and Belzek and Majdanek camps. The extermination of those declared as inferior to Aryans became the official policy of the Nazi government following the Wannsee Conference that occurred in Berlin on January 20th, 1942 and was labeled as the “Final Solution.” Although Jews were the primary focus of the German policy of extermination, other minority groups such as the Roma were identified for elimination as well.

Precursors to the Holocaust

One of the significant precursors to the Holocaust was the T-4, or Tiergartenstrasse 4 program that was operated from the Berlin Chancellery. The program was created in order to medically kill mental patients and those with physical defects defined by the Nazi government and determined to be undesirable. The official name of the organization was the Reich Work Group of Sanitoriums and Nursing Homes, or Reichsarbeitsgemeinschaft Heil und Pflegeanstalten in German. The program had the impact of legitimizing government-sponsored killing through emphasizing the racial purity of the Aryan race through the use of euthanasia. The technology developed in the T-4 program would later be applied to employment for mass murder during the Holocaust.

Starved prisoners, nearly dead from hunger, pose in concentration camp in Ebensee, Austria. The camp was reputedly used for “scientific” experiments. It was liberated by the 80th Division.

A common mistake made by students of the Holocaust is confusing Nazi Death and Concentration camps. Although many of the concentration camps had numerous deaths occur at them, the Germans differentiated between camps by their primary designed purpose or function. Concentration camps were established as early as 1933 under the “Protective Custody” law passed on February 28th, 1933. This law allowed the police to make arrests based on the suspicion of criminal activity and interred without a trial or legal representation. The first camp would be created at Dachau near Munich that year being followed by Buchenwald near Berlin in the north. A number of additional camps would be created between 1934 and 1941 consisting of Communists, democrats, socialists, political criminals, homosexuals, and Jews.

*Note the dates indicate the beginning of mass extermination at the camps vice the construction date. These are not all-inclusive of the Nazi death camps built and used during World War 2, just the major camps in the Holocaust.

The Auschwitz death camp had a dual role as both a concentration and killing camp. The camp was located approximately 37 miles west of Krakow in the Eastern Upper Silesia that was annexed to Nazi Germany in September 1939 and was the most notorious of all Nazi death camps due to its central location. In total, there were three camps at Auschwitz with the first being built on the order of Heinrich Himmler shorter after Poland’s defeat with the initial capacity of 10,000 prisoners.