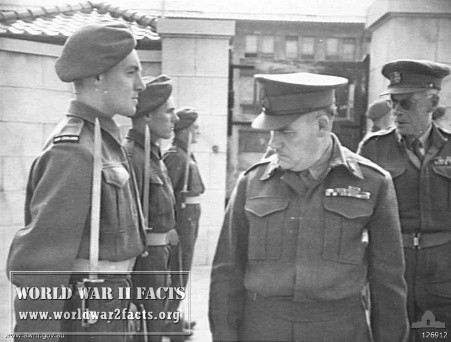 When studying World War 2, a common question that arises is what exactly each army group or unit name means? This question arises a fair bit with readers of WorldWar2Facts.org, so we have compiled a table to help explain what the unit or group names mean, what units made up larger WW2 army units,  the rough size of the unit, and what rank of officer or NCO was normally in charge. Depending on the country, the specific rank or number of personnel may have been different during the war; however, this table should provide the reader with the proper context in order to continue his or her studies of the war. The numbers provided are roughly based on the notional sizes for infantry units. For mechanized or support units there will be a bit more variation in the total numbers within the group. Additionally, although we use the term “army” in this table, the Marines use a similar hierarchy with mostly the same names as the Army for purposes of studying the war.

What was the Most Common Army Group?

Across the Allied and Axis armies, the battalion is likely to be the most referred to Army or Marine group or unit when studying WW2. Many countries preferred having at least three groups that made up the next unit in the army hierarchy, with four being optimal. These numbers allowed

for two to three groups to be placed on the front line or where the expected action would be and maintain one in reserve. Despite the advent of more modern communications and sensor technology since World War II, similar army group organization has been mostly adhered to in the modern day in conflicts such as Operations Enduring and Iraqi Freedom.

What Role did the Regiment have in World War 2?

The regiment has been in existence since at least the 17th and 18th centuries when it was the primary organizational unit for an army. Notionally in this timeframe, a regiment consisted of 1,000 personnel and was commanded by a Colonel. During WW2, although there were a number of regimental organizations that would be kludged together to form a division, many countries chose to center the training, administration, and tactical employment of subordinate units at the division level consisting of three or more battalions.

What Role did the Task Force Play in WW2?

During World War 2, a Task Force was a temporary grouping of one or more units for a specific operation. Meant to be temporary in nature, the Task Force ideal was shared across the various militaries that took part in the war; albeit, under slightly different names in some cases. For the Germans, the term was Kampfgruppe and the Americans used the term U.S. Combat Team at times during the ar.