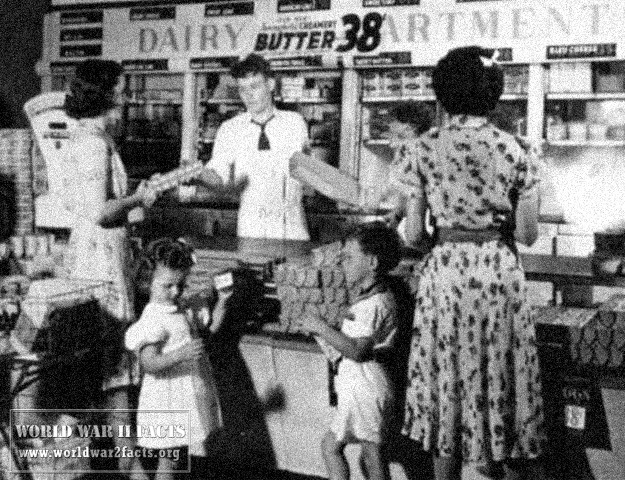 During World War II even people who had money couldn’t just walk into a store and buy as much stuff as they wanted. During that time most things were rationed, that meant that despite having enough money to buy as much as you want of something you were only allowed to buy a certain amount, despite being able to afford more. The governments had to introduce World War 2 rationing because many things were in short supply during the war, without rationing rich people could have bough most of the food, clothes and fuel and there wouldn’t be anything left for the rest of the population, through rationing everyone got a fair share.

World War 2 Rationing in the U.S.

When the Japanese attacked Pearl Harbor the question whether America will enter the Second World War was over. Many

eager men were fast to enlist for serving in the war but the rest of the citizens would feel the war soon enough. It was like the economy turned into a war machine almost overnight, consumers were now in second row, military production was the #1 task and soon nationwide rationing was introduced.

Each American family got war ration tokens and books, the books and tokens explained how much of goods like gas, meat, sugar and so on each person could buy. Food was one of the first things to be heavily rationed, especially meat. Rubber was the first nonfood item that was rationed, this was due to the Japanese capture of the Dutch East Indies which were producing 90% of America’s raw rubber at the time.

World War 2 Rationing in the UK

The British were in an even worse position than the U.S. Germany had planned to cut off the British from food and all sorts of other goods, in doing so they hoped that the population would lose morale and surrender. German submarines regularly attacked ships that brought supplies to Britain.

Ration books were basically books that contained coupons which would be cut out or signed by a shopkeeper when the owner of the ration book bought food or other goods, the items were still paid with money but the coupons indicated how much each person was allowed to buy.

There were a few different ration books, the main difference was their color. The color was important because it indicated the amount of food you could buy.

Typical Rations Allotted in the UK (Weekly Basis) in April 1945

Surpassingly enough there weren’t many restrictions that the government at the time laid upon the civilians, at least during the first part of the war. In the early years of the war most people could freely buy any goods they could afford. Hitler didn’t

want to introduce a rationing program at first because he believed that it would negatively affect the morale of the population, but eventually world war 2 rationing was introduced in Germany. One of the main reasons that the Nazi were so popular in Germany was that they brought a better standard of living to the population, Hitler knew this and that was one of the main reasons why he didn’t want to introduce rations, the other being that shortages of food and other goods were one of the major factors in destroying civilian morale in World War I which was one of the reasons that led to the defeat of Germany in the previous conflict.

When the tide of the war shifted against the Germans a very strict rationing program had to be introduced. Men in heavy industry got extra rations while Jews and Poles in occupied areas almost didn’t get any food. The rations for the German population were enough to live on, but it wasn’t luxurious. Chocolate, cakes and whipped cream became an unknown for the German population from 1939 until 1948. Meat was available but not for everyday consumption. Vegetables and fruit that were locally grown weren’t rationed, but anything that had to be imported wasn’t available.