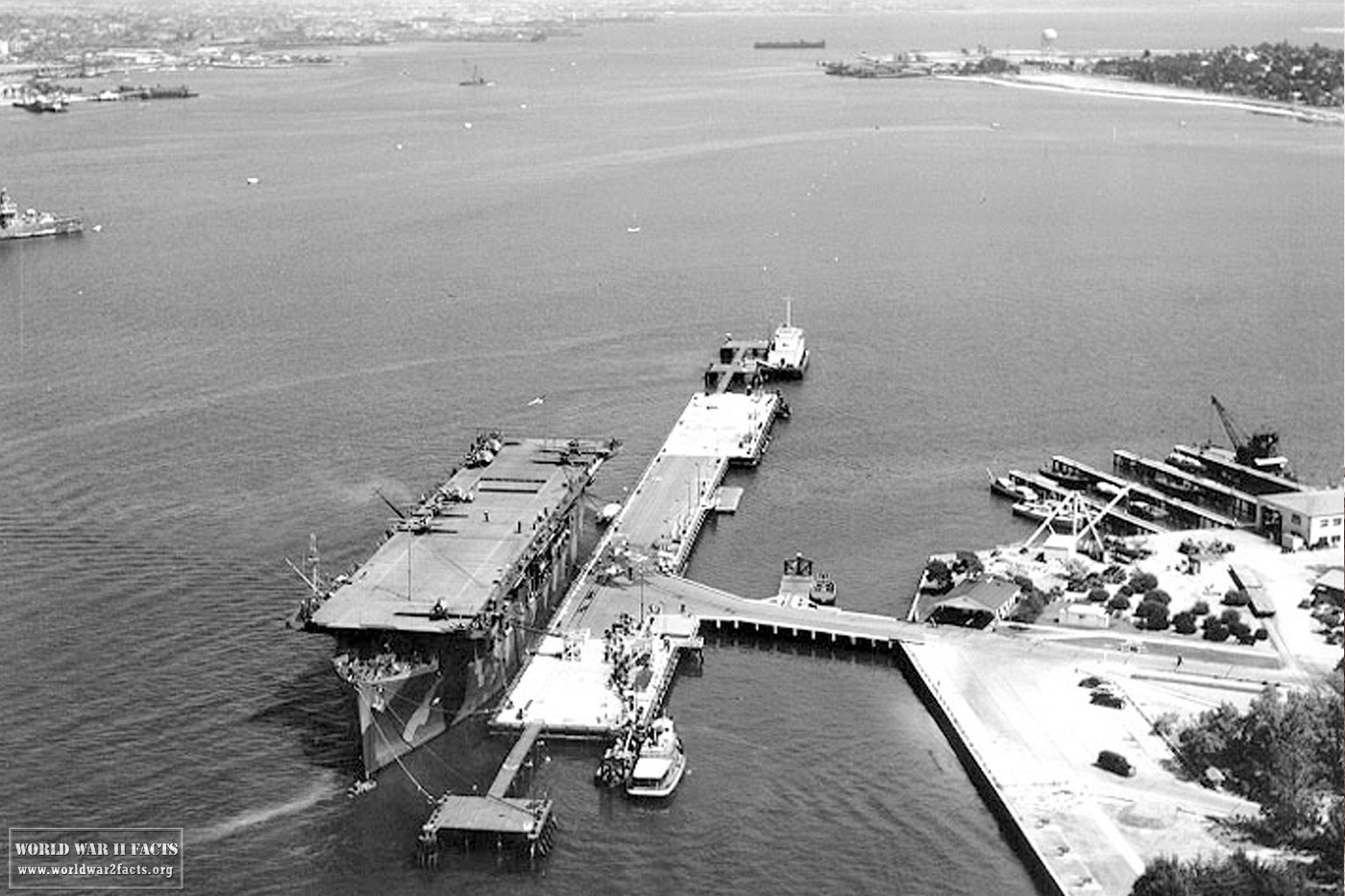 The USS Long Island was originally commissioned as AVG-1, reclassified to ACV-1, and finally categorized as CVE-1 (Carrier Escort) and saw service during World War 2. The Long Island was the first escort carrier commissioned by the United States Navy and was the second ship to be named after the city of Long Island, New York. Originally laid down on July 7th, 1939 by the Sun Shipbuilding and Drydock Company in Chester, Pennsylvania, the original ship name was Mormacmail. Long Island was launched on January 11th, 1940 and was sponsored by Ms. Dian B. Holt. The navy acquired the ship on March 6th, 1941 and commissioned her on June 2nd, 1941 with Commander Donald B. Duncan in command of the ship.

Operations Before the Attack on Pearl Harbor

Prior to the attack by the Imperial Navy on Pearl Harbor, the USS Long Island was based and operated out of Norfolk, Virginia. The ship was employed to conduct experiments to prove if it was feasible to operate naval aircraft from cargo ships converted into escort carriers. The information gleaned from these experiments helped improve the combat effectiveness of the escort carriers or “Baby Flattops” constructed after the Long Island. Shortly after the Japanese attack on Pearl Harbor, the Long Island was employed to escort a convoy to Newfoundland and to qualify carrier pilots in Norfolk prior to departing for Pacific Operations on May 10th, 1942.

USS Long Island in the Pacific Theater of War in WW2

The USS Long Island reached San Francisco, California on June 5th, 1942. Shortly after arrival, the ship would join the four battleships under Admiral William S. Pye’s command and would provide air cover to reinforce the fleet after the victory over the Japanese at the Battle of Midway.  After this period of service, she would return to the west coast to conduct carrier pilot training on June 17th, 1942.

After concluding local training at Palmyra Island, the Long Island embarked two squadrons of USMC aircraft and departed for the South Pacific on August 2nd, 1942. Five days after sailing, the USMC landed at Guadalcanal and needed additional air support. The Long Island reached Fiji on the 13th of August and proceeded to close Guadalcanal. Launching aircraft approximately 200 nautical miles southeast of the island, the ship sent 19 Grumman F4F Wildcats and 12 Douglas SBD Dauntless dive bombers to support the Marines. The planes would be the first to reach Henderson field and would prove critical in the taking of Guadalcanal. On August 20th, 1942, the ship was reclassified to ACV-1 and would seail for Efate Island, New Hebrides.  The risks and work conducted by the ship and her aircraft would be immortalized in the movie, the Flying Leatherneck.

The USS Long Island returned to the U.S. West Coast on September 20th, 1942 and would train new carrier pilots in San Diego for the next year. She would be reclassified as CVE-1 on July 15th, 1943, and between 1944-1945 the ship would transport airplanes and crews from San Diego to various locations throughout the Pacific area of operations. Once V-J Day occurred, the Long Island would transport sailors and soldiers home during Operation Magic Carpet.

USS Long Island After the War

USS Long Island was decommissioned on March 26th, 1946 at the Puget Sound Naval Shipyard. She would be struck from the Naval Vessel Register on April 12th, 1946 and then sold to the Zidell Ship Dismantling Company of Portland, Oregon on April 24th, 1947 for scrap. The Canada-Europe Line purchased the ship on March 12th, 1948 to convert her to the merchant service. After the conversion process was completed in 1949, the Long Island was renamed as the Nelly. She would then serve as an immigrant carrier between Canada and Europe. Just four years later in 1953, the ship would see yet another name change to the Seven Seas. In 1955, The ship was chartered to support the Europe-Canada Line and would make her last voyage in 1963 (in support of this line). In 1965 (July), the ship suffered a large fire and was towed to St. John’s, Newfoundland. She would get repaired and see her final voyage on September 13th, 1966. Rotterdam University purchased the ship the same year and employed her a s youth hostel through 1977 when she was sent to finally be scrapped in Belgium.