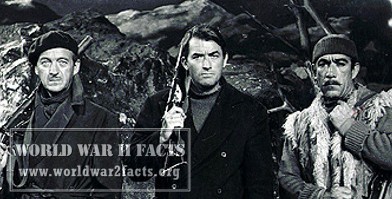 If ever there was a film that would belong in a “top ten war movies of all time” list, this would be it.

Starring legends Gregory Peck, David Niven, Anthony Quinn, and more stellar players, it is one of those movies that was “before its time” if you will.

The basic plot is simple enough, a team of Allied and Greek soldiers set out to destroy a Nazi gun emplacement carved into the hillside of the Greek island of Navarone. However the film delves far beyond that.

It evolves into a dark and grim exploration of the choices and responsibilities laid upon our fighting men, and additionally those who take up the cause out of uniform.

Take for example Niven’s character, the forever-Corporal Miller. He’s been stuck at corporal for a long long time, and the reason becomes clear. Even though he’s the best at what he does, he despises what he has to do, and doesn’t want the responsibility that comes with the ranks of officer.

There are a lot of tense moments dealing with situations such as this. Peck’s Mallory is also torn between his past actions (and the consequences of such) and what “the job” entails.

It’s gritty, especially for the time, and it accomplishes it without going over the top. Dark, thoughtful, and packed full of action and suspense. If you’ve never seen it, do so. Now!