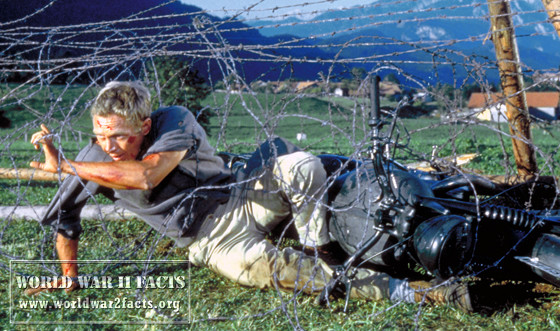 I almost hate to say this, but The Great Escape is actuallly a *fun* movie.  It’s loosely based on a series of real events from the Paul Brickhill book of the same name.   The story follows a band of Allied POW’s who have a nasty habit of escape attempts from their Nazi prison camps, and have all been sent off to a new, “escape proof” camp.  Of course they have other plans.

They band together in various and intricate ways to construct an elaborate tunnel out of the complex.  The methods they employ in this endeavour are truly ingenious, from dirt-dumping mechanisms, to elaborate forgeries of documents and creating civilian clothing from the rags they’ve got at hand.

When I say “fun”, I mean that it manages to keep itself light-hearted and optimistic, right up until the end.  Where other films like Stalag 17 and TV such as Hogan’s Heroes play up the comedy to a point where you start getting a bit uncomfortable, The Great Escape manages to maintain an air of suspense and immediacy that make it a true war movie classic.  In fact the movie was nominated for an Oscar for best editing, along with several other awards.  The all-star cast factors into this film’s status as well, with such staples as Steve McQueen, James Garner, Richard Attenborough, Charles Bronson, Donald Pleasance, James Coburn, and David McCallum.

Of course the tunnel was only partially successful, as only a fraction of the intended escapees actually made it out, and most of them were later caught and either executed or brought back to the camp.  This last bit of the film sort of brings the whole thing to a bit of an anti-climax, as we bear witness to the capture and desperation, and the execution of most of them.  The few who do make it out, though, make the entire effort worthwhile.

Above all, though, the freedom-loving spirit of the film remains intact, even as Hilts (McQueen) heads off to “the cooler” with his baseball in hand yet again.

In a way, too, it illustrates a bit of the paradox that existed when it came to the Nazis and the Allied POW’s, as they appear to follow a lot of western military “honor” in the way the prisoners were treated.  Compare and contrast.  Additionally, we get a glimpse into a bit of the German politics of the day, as the Luftwaffe officer in charge of the camp seems content to, as he puts it, “comfortably sit out the war”, and attempts to convince the prisoners to do the same.  Finally he’s escorted off by the SS to an unpleasant fate.

But all of that is second to the aforementioned spirit of the movie, and the interludes of comedy that not only keep us entertained, but further that spirit for the prisoners.  Of note in that respect is the “4th of July” celebration.

The Great Escape definitely is on the list of all-time war movie classics.