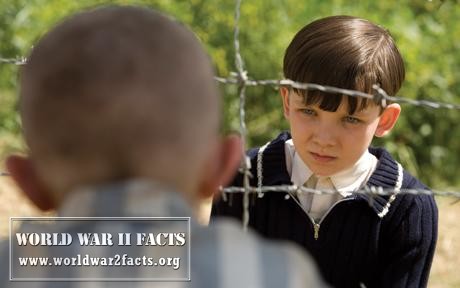 Where do I even begin.  The Boy in the Striped Pajamas is, plainly put, an excellent film that should move even the most hardened person in some way.

Young Bruno (Asa Butterfield) is the son of a Nazi officer (David Thewlis) who moves his family to a country house/bunker to avoid the coming Berlin air raids.  At least on the surface.  In actuality he’s there to oversee the Jewish work camp next door.

Bruno, however, isn’t aware of what’s going on, and in typical eight-year old fashion, tries to make the best of his situation.  He spots a “farm” a short distance away, and makes plans to visit this forbidden place where his friend, and prisoner, Pavel (David Hayman) lives.

When he arrives, he finds another young boy, Shmuel (Jack Scanlon) on the other side of a forbiding electric barb wire fence.  He makes friends with Shmuel, and its clear that neither of them really understands what is going on around them, or what is happening to them.

I’m not going to spoil the ending, that’s just something you’ll have to experience for yourself.  If it doesn’t make you squirm in your easy chair then you must not be human, that’s the long and short of it.

Throughout the picture, Bruno’s viewpoint is the key.  You have to put yourself in his shoes, how could an innocent naive kid even begin to comprehend the events unfolding around him?  He can’t, and its this innocence that makes the story, and the ending, even more moving, and yes, I’ll say it, depressing.

The performances of the two kids are simply fantastic.  The confusion and despair on behalf of Shmuel.  The confusion and unrequited love for his father, and the loyalty to Shmuel on Bruno’s part.  Even the rest of the cast performs admirably, most notably Hayman (Pavel), especially in the few scenes between he and Butterfield, as he struggles to keep himself together in front of the innocent child.

If it weren’t simply for the subject matter alone, forget about the ending, I’d say this would be an excellent classroom picture.  But, much like Bruno, how do you even begin to explain these things to young kids?  Maybe older students…  There is, in fact, a “classroom edition” of the DVD, so I’m not the only one to think of this.

The Boy in the Striped Pajamas shouldn’t be missed.  If for nothing else but to think about what it used to be like, to just be a kid, and try and make sense of what life gives you…