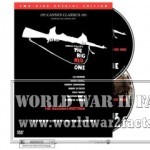 When I originally reviewed The Big Red One, the original version, I found it to be lacking something in many respects. I dunno, it just seemed to be missing something.

Then I heard about the “Reconstruction” of The Big Red One, an attempt to rebuild director Samuel Fuller’s original vision of the film. I have to say, I have a much better respect for this movie now that its more-or-less “complete.”

With an additional hour or so of footage recovered from the Warner and Lorimar archives, and painstakingly cleaned up and re-edited back into the movie, it takes on a much more cohesive tone.

Additionally, the editors went back and did a lot of sound work, which honestly I didn’t even notice until I watched the “Making of” feature on the second disc of the set. That’s a compliment! The work they did rebuilding these lost scenes and re-working the audio and soundtrack to make them fit in seamlessly was just amazing.

The recovered scenes flesh out a lot of the characters in more detail, which was one of my gripes about the ‘original’ version. In particular was Hamill’s character, Griff. His internal conflict was really brought out more. Marvin’s “Nameless Sarge” character also takes on a bit more detail, as we really see his weariness of war, and his overall compassion in scenes that should have been there.

Then there is the contrast of the German who follows them from North Africa, all the way up to the final scene of the film. This connection wasn’t clear to me in the original version, but now that its made much more obvious due to the insertion of several dropped scenes with him, it really hits home.

The absurdity of war that Fuller sought to portray really comes through more as well. The French Legion cavalry vs. the German tank in the ampitheater is just one of those scenes. The “infiltrator” at their table is but another, briefer one, but one of those “gotcha” moments that adds to it. You’ve also got to love the cut “Fritz” scene during “Sarge’s” brief stay in the German hospital, a scene that you know wouldn’t have passed muster in 1980, but is just hilarious today.

In addition, the second disc of the set includes even *more* scenes that didn’t make it into the reconstruction, and for good reasons. The commentary over them is simply great from a technical point of view. There’s a great documentary on the entire process of the reconstruction, with lots of interviews with the cast (sans Marvin of course) and Fuller himself.

As a package, The Big Red One: The Reconstruction turns a merely average war movie into a true war movie classic. It’s sad and unfortunate that Mr. Fuller couldn’t have lent a hand in the effort, and that the studio couldn’t have put this together in the first place.