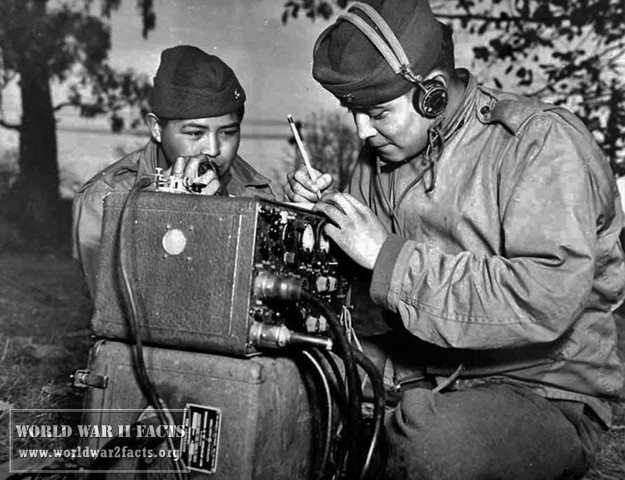 Communication is one of the most important components in any war. No matter what the size of the troops or the distance everyone must know when he needs to attack and when to withdraw. If the enemy knows what you’re planning you will not only lose the element of surprise but the enemy, knowing where you are and what you’re doing can attack and destroy you. From the need to incorporate more advanced encryption into field operations in World War 2 came the Navajo Code Talkers program.

During World War IIencryption or code was extremely important for communication. The problem at the time was that even when

codes were used, they were often broken by the enemy. In 1942 Philip Johnston came up with a code based on the Navajo language that he thought was unbreakable. Philip Johnston, the son of a Protestant missionary had spent much of his childhood on Navajo reservation. He grew up learning the language and customs of the Navajo. In adulthood he became an engineer working for the city of Los Angeles but also gave lectures about the Navajo people.

One day, while reading the newspaper he saw a story about people trying to come up with a way to code military communications. This story gave Johnson an idea and the next day he went to Camp Elliot where he presented his idea for a code to the area signal officer Lt. Col. James E. Jones.

Jones was skeptical, there were previous attempts to create codes using Native American languages but the problem was that their languages didn’t have words for military terms. Jones worried about using English terms in conjunction with the Navajos language because if he were to code everything in Navajo and use the term machine gun the enemy could still decipher the code.

Figuring Out How to Encrypt English Words in the Navajo Language

Johnson had another idea, he figured that instead of just adding the term machine gun to the Navajo language, one could add rapid-fire gun something that could be easily constructed using the Navajo language. Jones recommended this to be demonstrated to Major General Clayton B. Vogel and the demonstration was successful. A “pilot project” with 30 Navajos was started to test out the code.

The recruiters for the program visited the Navajo reservation and selected 30 for the project. One of the initial problems was that many of the Navajo Code Talkers had never been outside the reservation which made the move more difficult.

After the code was created it was tested over and over again, it was essential that the code be perfect because one mistranslated word could lead to thousands of deaths. After the first 29 of the Navajo Code Talkers mastered the code they were sent to Guadalcanal to use the new code in combat while two of them remained behind to train future code talkers.

Johnson couldn’t participate in the creation of the code because he was a civilian but he soon offered to enlist if he would be allowed to work on the program. He was accepted and took over the training part of the program.

The project was a success and permission was soon given to recruit unlimited members into the Navajo Code Talkers program. A total of 50, 000 people lived in the Navajo nation and by the end of World War II, 420 Navajo men were code talkers.

The Navajo Code Itself

translated to Navajo. These were terms for planes, officers, months and general vocabulary. Also part of the code was a Navajo equivalent to the English alphabet for spelling out names or the names of specific places.

Cryptographer Captain Stilwell suggested an expansion of the code. When he monitored transmissions he noticed that the spelling and repetition of individual letter equivalents could allow the Japanese to break the code. Following the suggestion another 200 words and another twelve letter equivalents were added. At this point the code had 411 terms.

While using the code on the battlefield it was never written down, only spoken. In training the Navajo Code Talkers had to send and receive the code as soon as possible, delays could lead to deaths so the code talkers became fluent in the code.

For the curious, the United States Navy has the June 1945 version of the Navajo Code Talkers Dictionary posted online. A subset of the code to give readers who don’t have time to check out the entire dictionary on the translation of  the names of some of the officer ranks translated to Navajo and the literal translation of the Navajo word follows:

Navajo Code Talkers in the Field

When the Navajo were first introduced many of the military leaders were skeptical. After a few demonstrations most of the commanders recognized and appreciated the importance and potential of the code.

From 1942 to 1945 the Navajo Code Talkers took part in many battles in the Pacific, they weren’t just communicators but also regular soldiers. One big problem the Navajo had was that they were often mistaken for Japanese soldiers and were almost shot many times because of this. Due to the frequency of these mistakes some commanders even assigned bodyguards to each of the Navajo Code Talkers.

The Navajo played a huge role in the success of the Allies in the Pacific, the war ended and the code remained a mystery to the enemy code breakers.