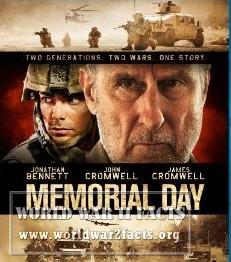 I didn’t recall this film being promoted in any significant way, and its a damn shame.  Because Memorial Day has got to be one of the better war movies I’ve seen in a long, long time.  I suppose my experience might have turned a bit subjective, but I suspect it would be that way for a lot of people.

We start with Kyle Vogel (Jonathan Bennett), just coming back from a tour in Iraq.  During his stay in a military hospital, he tells his nurse all about his grandfather, and the events of one fateful Memorial Day in 1993, 10 years earlier.

“It’s Memorial Day, isn’t it? What are we supposed to remember?”

Young Kyle (Jackson Bond) finds his grandfather Bud’s (James Cromwell) footlocker full of mementos from his time in the 82nd Airborne in WWII.  Reluctantly, Bud allows Kyle to pick three items from the chest, and he tells the story surrounding each one of them.  The stories of course are done in flashback with Cromwell’s son John taking the role of a young Lt. Vogel (quite convincingly I might add.)

Also told are a few stories of Kyle’s tour in Iraq, with both complement and contrast the two’s experiences in a very coherent manner.  (I don’t want to spoil any of these “stories”, so lets just say they really are told quite well.)

On another level, its also about how the experiences of war affect you, for the rest of your life.  How after all these years it still haunts Bud, and the immediate and future effects on Kyle.

As for my own experience of this movie, I found myself seeing a lot of my own family in this.  Mainly because of James Cromwell and Mary Kay Fortier-Spalding’s portrayal as the grandparents.  The entire Vogel household reminded me so much of my own parents (both in appearance and mannerism), and grandparents that it was hard (in fact impossible) to step outside of that.  The entire “don’t talk to Grandpa about the war” bit, the German “sensibility” of “Opa” and “Oma” (man a few of those moments were familiar….)  And at times, I wondered how many other people would see this in a similar light.

“Stories live forever — but only if you tell ’em.”

Honestly, if it weren’t for some rather realistic depictions of wartime violence and injury I would recommend this for the younger audience who may not have that connection to a veteran of past wars.  Those who really don’t have anyone to tell them these kind of stories or can relate to events outside of a history book. I’d say that judgement is up to you as a parent.

I have to succumb to subjective feeling here and give Memorial Day a full 9/10.  I don’t do that very often.  (Still haven’t given a solid 10/10, not sure if that would ever happen. Me and my logarithmic scale!)  It is designed to tug at all of your bits, and manages to pull every single one of them.  At least it did mine.

Here’s the trailer.  I’m seriously considering putting this one on the shelf permanently, I thought it was that good.