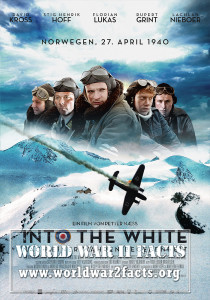 Into The White puts us into the Scandinavian winter desert during WWII.  Two planes, German and English, have just been shot down in the same vicinity.  The survivors each come across a small hunting cabin, and they’re forced to work with each other to survive.

Yep, that pretty much sums up the plot of Into the White.  But really, the film is much more than that.  It’s about doing what you need to do to survive.  It’s about overcoming the labels of conflict that your government tags you with, and realizing that the enemy is no different from you.

The German pilots, led by Shopis (Florian Lukas), found the cabin first.  When the English, Davenport (Lachlan Nieboer) and Smith (Rupert Grint, Harry Potter) arrive, they’re promptly taken prisoner by the Germans, and the game is on.  What game?

Basically it becomes a game of posturing.  Of who is actually in charge, who is making the rules.  The Germans hold the line for a time, until the English get one up on them.  Eventually, the stress of the situation, and the lack of food and firewood start to get to them.  They realize that the only way they will survive is to work together.  At first its difficult, but by the end, everyone gets along like they’ve known each other forever.

It’s not the plot that moves Into The White.  The plot is really quite simple.  It’s the cast able to portray the fear, the uncertainty, the posturing, yes the humor, too, the despair, and the friendship to a point where you believe it without question or doubt.  In such a tight movie (nearly everything happens in and around this cabin) the cast and the acting is what matters.  Have to compliment everyone on a job well done.

Action? Combat? You’re fooling yourself.  But again, not the point.