The Focke-Wulf Fw 190 Würger is a one-seat, one-engine fighter aircraft widely used throughout World War II and designed by Kurt Tank in the late 30s. Early development Genesis In autumn 1937, the German Ministry of Aviation asked various designers for a new fighter to fight alongside the Messerschmitt Bf 109, Germany’s front line fighter.

Though flown well before World War II this trim little fighter was unknown to the Allies and caused a nasty surprise when first met over France in early 1941. Indeed, it was so far superior to the bigger and more sluggish Spitfire V that for the first time the RAF felt not only outnumbered but beaten technically. Fortunately, a Fw 190 landed by mistake in England in June 1942, and the RAF was given a heaven-sent opportunity for testing the aircraft in direct comparison to their beloved Spitfire. However, the Fw 190 turned out to be even better than expected.

It was faster than any other Allied fighter in service at that time, had far heavier armament (at that time the standard on Fw 190’s was two 7.92mm MG 17’s on the engine, two of the previously unknown Mauser cannon inboard and two 20mm MG FF outboard), was immensely strong, had excellent power of manoeuvre and good pilot view. It was also a subtle target, much lighter than any Allied fighter and had a stable wide-track landing gear (unlike the Bf109). Altogether it gave Allied pilots and designers an instant inferiority complex. Though considered in most circles to have been a better aircraft than the Messerschmitt Bf109, it never supplanted the 109 but was subsequently made in a profusion of different versions by many factories. 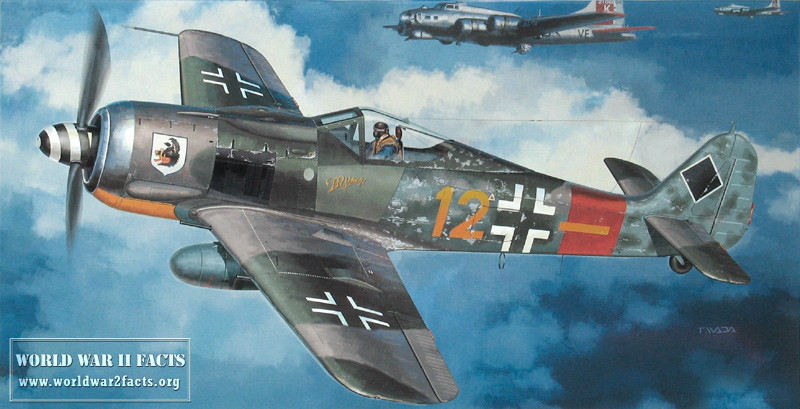 The A series included many fighter and fighter-bomber versions, some having not only the increasingly massive internal armament but also two or four 20 mm cannon or two 30 mm cannon in underwing fairings. Most had an emergency power boost system, using MW 50 (methanol/water) or GM-1 (nitrous oxide) injection, or both. Some were two-seaters, and a few had autopilots for inclement weather and night interceptions.

The F series were close-support attack aircraft, some having the Panzerblitz array of R4M rockets for tank-busting (also lethal against heavy bombers). The G was another famous series of multi-role fighter/dive bombers, but by 1943 the main effort was devoted to what the RAF called the “long-nosed 190”, the 190D. This was once more the fastest fighter in the sky, and late in 1943, it was redesignated Ta 152 in honor of the director of Focke-Wulf’s design team, Professor Kurt Tank.

The early 152C series were outstandingly formidable, but the long span H sacrificed guns for speed and height. Tank himself easily outpaced a flight of P-51D Mustangs which surprised him on a test flight, but only ten of the H sub-type had flown when the war ended. Altogether 20,051 Fw 190’s were delivered, plus a small number of Ta 152’s (67, excluding development aircraft). It is curious that the Messerschmitt Bf109, a much older and less attractive design with many shortcomings, should have been made in greater quantities and also been the aircraft of choice of nearly all the Luftwaffe’s aces.

The 801q/tu, with the &quot;T&quot; signifying a Triebwerksanlage unitized powerplant installation, was a standard 801d with improved, thicker armour on the front annular cowling, which also incorporated the oil tank, upgraded from 6 mm on earlier models to 10 mm.

Changes introduced in the Fw 190 a-8 also included the C3-injection Erhöhte Notleistung emergency boost system to the fighter variant of the Fw 190 a, raising power to 1,980 ps for a short time.

Fw 190 a-10 Late in the war, the a-10 was fitted with larger wings for better maneuverability at higher altitudes, which could have allowed additional 30 mm calibre, long-barreled mk 103 cannon to be fitted.

Video Documentary Footage of the Fw 190