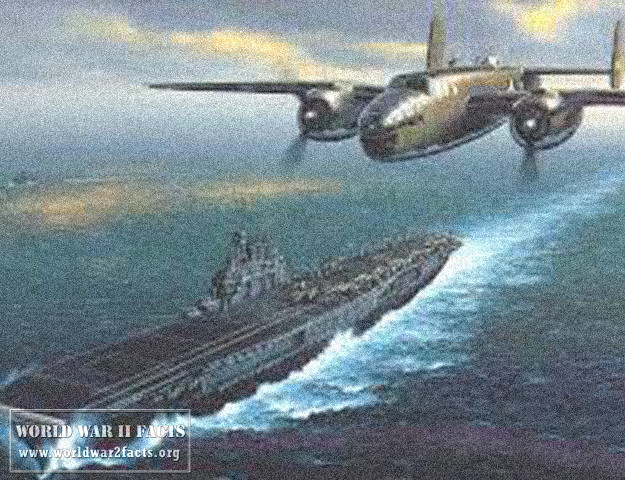 After the Japanese attack on Pearl Harbor, US President Franklin D. Roosevelt wanted to strike back as soon as possible. He wanted retribution but also wanted to show the Japanese that they aren’t invincible. Immediately the military started working on a plan to attack the Japanese home islands. The culmination of the planning would result in the Doolittle raid on Tokyo on April 18, 1942.

Background to the Doolittle Raid

Captain Francis Low while at Norfolk noticed that medium range bombers can take off a runaway that was remarkably similar to an aircraft carrier. After looking into it he found that it is possible for these kinds of planes to take off from an aircraft carrier at sea. He presented the idea to Admiral Ernest J. King, Chief of Naval Operations. His idea was approved and

preparations were made, the operation was under the command of Lieutenant Colonel James Doolittle. Doolittle hoped to launch the bombers from an aircraft carrier, use them to bomb Japan and then land near Vladivostok in the USSR

After landing in the Soviet Union the aircraft could stay there as part of the Lend-Lease agreement. The Soviets were approached but they weren’t at war with Japan so they declined. Because of this the bombers would have to fly 600 miles (965 kilometers) to land in China. Doolittle chose the B-25B Mitchell for the mission because of the plane’s range and payload capabilities as well as its size which made it suitable for aircraft carrier takeoff. To make sure that it indeed meet all the requirements for Doolittle’s Raid on Tokyo, two of the aircraft were launched from the USS Hornet on February 2, 1942.

Satisfied with the results the mission was set to start. Doolittle started selecting crews for the mission, he chose his men from the 17th Bomb Group. Further crews were selected and offered to volunteer in an unspecified mission that was labeled as “extremely hazardous”. On 17 February the volunteers were detached from the Eight Air Force and sent into specialized training.

The initial mission was planned with 20 aircraft for Doolittle’s Raid on Tokyo, 24 B-25s were modified to meet the mission’s requirements. One of the changes made to the aircraft was the removal of a gun torrent and some bombsights. Also additional fuel tanks and de-icing equipment were added. While the planes were being modified the crews trained for aircraft carrier take offs, flying and bombing.

On March 25 the crews flew their modified planes to McClellan Field where the final modifications were made. On March 29, 15 aircraft that were selected for the mission, with one reserve were flown to Alameda and landed on the USS Hornet. On April 2, the Hornet met with Task Force 18 at Hawaii.  Vice Admiral William F. Halsey’s Task Force 18 served as air cover for the Hornet during the raid. The US force numbered two aircraft carriers, eight destroyers, three heavy cruisers, one light cruiser and two oilers.

Under radio silence the fleet was refueled for the last time on April 17, after the refueling the oilers withdrew east with the destroyers. Going forward the carriers and cruisers went deep into Japanese territory. On April 18 the Japanese spotted the

Doolittle and the Hornet’s captain Marc Mitscher decided to launch Doolittle’s Raid on Tokyo early, the crews manned their aircraft and started taking off. With the mission compromised, Doolittle decided to use the reserve aircraft as part of the raid. The 16 aircraft made their way towards Japan in groups consisting of two to four planes before lowering their altitude to avoid being detected. Once ashore they spread out and attacked 10 targets in Tokyo, 2 in Yokohama, and one in Kobe, Osaka, Nagoya and Yokosuka. Each aircraft had three high explosive bombs and one incendiary bomb.

Almost all of the aircraft attacked successfully with no heavy enemy resistance. After the attack the raiders headed for China, one of them, low on fuel made it’s way towards the Soviet Union. The other planes quickly realized that they didn’t have enough fuel to reach their destination, this was due to their early take off. The pilots abandoned their aircraft and used parachutes to land safely, while some attempted crash landings. The 16 B-25 successfully landed in the Soviet Union.

Compared to the damage done to the Japanese mainland later in the war by B-29’s and the nuclear bomb, the Doolittle raid resulted in much less material damage. During the raid, a total of eight primary and five secondary targets were hit. These included a steel mill, several power plants, an oil tank farm, and the nearly completed aircraft carrier, Ryūhō which delayed the ship’s launch until November. Although the resulting damage was minimal, the news of the raid significantly increased American morale. It also had a strategic impact realized later in the war in that the raid made the Imperial Navy recall units to the homeland for defense. This resulted in a significant reduction in pressure on the British Navy in the Indian Ocean.

Similar to the political impact of the Pearl Harbor attack, the Imperial Navy took blame for permitting the American carrier force to get close enough to the Japanese home islands to conduct an attack without being damaged in return. The Imperial Navy’s command staff would also remain confused regarding the source of the attack which would help strengthen their desire to attempt to capture Midway. This would result in a major turning point in the war with the American victory at the Battle of Midway.